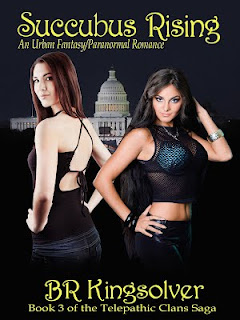 The Goddess has plans for Brenna and Rebecca. And the Goddess has a wicked sense of humor.
Rebecca Healy is a true wilder, growing up with no contact or knowledge of other telepaths. Discovered by a Clan member on the streets of San Francisco, she felt like she’d hit the jackpot. Finally, she knew what she was, or at least she thought she did.
When Brenna O’Donnell, long-lost heir of the O’Donnell Clan, and the strongest telepath in history, is returned to her family, she and Rebecca form a tight bond. Brenna has it all, looks, money, power, and men falling all over her.
Rebecca isn’t jealous, but it would be nice to find someone who would really love her and stick around in the morning. She’s intrigued by a handsome South American general, but of course, he has his sights set on Brenna. Carlos de Vargas wants more than love. His Clan has its back to the wall, and they hope for an alliance with O’Donnell. An alliance that would lead to war.
The story began in The Succubus Gift and continued in Succubus Unleashed. In Succubus Rising, questions are answered and new mysteries are revealed.

Author Bio:
I made silver and turquoise jewelry for almost a decade, ended up in nursing school, then took a master’s in business. Along the way I worked in construction, as a newspaper editor, a teacher, and somehow found a career working with computers.

I love the outdoors, especially the Rocky Mountains. I’ve skied since high school and I’ve hiked and camped all my life. I love to travel, though I haven’t done enough of it. I’ve seen a lot of Russia and Mexico, not enough of England. Amsterdam is amazing, and the Romanian Alps are breathtaking. Lake Tahoe is a favorite, and someday I’d like to see Banff in Canada.

I have a very significant other, two cats and two Basset Hounds. I’m currently living in Baltimore, nine blocks from the harbor, but still own a home in New Mexico that I see too infrequently.


When I started thinking about what kind of character could be strong, kick-ass, and blatantly sexual while still being one of the good guys.

I started researching paranormal "powers", and managed to put together a coherent list of talents and myths people have envisioned through the centuries. One of the myths I find particularly humorous is that of the succubus. The medieval church used that myth to demonize sexual women. I thought about the idea of a different kind of succubus, a telepath who could drain a man’s life energy, but wasn’t aligned with the devil, and didn’t do him permanent harm.

From there the idea started to grow. I envisioned a matriarchal society, worshipping a Goddess, with Telepathic Gifts where the women are as strong as the men -- a society of equals. And in an equal society, women and men are free to express their sexual identities.

The idea of a powerful succubus, a member of a telepathic race, as a character for my books was born. Who better to fight against evil than the one thing a patriarchal society fears the most?

Not really. But making the sex scenes hot is hard, much more difficult than people think. When I first wrote them, they were very mechanical. It took a lot of revision and help from my beta readers.

The characters just come to me. I don’t have a problem dreaming up characters. In fact, I’ve been told that I include too many characters in my books. There are some fascinating people that ended up being cut. My books tend to start as an idea for a character, and then I develop a story for them.

I’ve always had an active imagination and composed stories in my head. I started reading urban fantasy a couple of years ago and loved the stories. When I received a Nook for my birthday, I discovered self-published works. I was talking about that with a friend and mentioned that I thought I had a story that people would like and she encouraged me to try and write it.

I can write anywhere. I’ve written in coffee shops, on planes, at a desk and sitting on the couch watching TV. When the story is flowing, it’s very easy and I can write anywhere, anytime. It’s the revisions and editing stages where it becomes difficult and I have to force myself to sit down and work.

Seeing the cover on a web site is one. It’s a feeling of accomplishment. The other is having people tell me they enjoyed one of my books.

Right now, I just started a new job and I’m working a lot of hours. That’s why the third book took so long to finish. Over the past four years, I’ve renovated a 100-year-old row house in Baltimore, doing much of the work myself. I like to travel and see new places, hike and ski. My two basset hounds like the hiking part most of all.

I have two projects I’ve started. One is a paranormal mystery/thriller set in the Telepathic Clans’ world with a telepathic s detective. The other is a YA or New Adult paranormal romance in a completely different setting. The main character in that book is a Valkyrie going to university at Oxford. Eventually, I need to write the fourth book to finish Brenna and Rebecca’s story, but I have to get away from that world for awhile.

First, have a good story. Second, spend some time learning the technical aspects of writing, i.e. how to tell that story. When I first started, I didn’t understand “show” versus “tell”. I still have some trouble with that. Third, find beta readers who will give you honest, in-depth criticism and listen to them. Last, find a good editor. I was a newspaper editor for five years and have been writing and editing in the business world all my working life. No one is qualified to edit their own writing. The easiest way to turn a reader off, especially a reviewer, is to have a book full of technical errors.