Blog Tour and Giveaway: The Trouble with Charlie 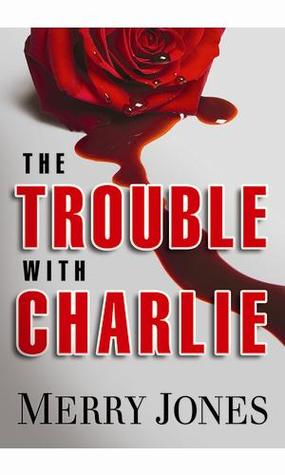 The biggest trouble with Charlie is that he's dead. His soon-to-be-ex-wife, Elle Harrison, comes home from a night out with friends to find his body in her den, her kitchen knife in his back. And, oddly, Elle has no memory of her activities during the time he was killed.

Another trouble with Charlie is that, even though he's dead, he doesn't seem to be gone. Elle senses Charlie's presence--a gentle kiss on the neck, the scent of his aftershave wafting through the house, a rose that seems to move from room to room on its own. And a shadow that appears to accuse her of murder--and with whom she argues.

In the process of trying to prove her innocence, Elle investigates Charlie's death--and his life. A psychiatrist diagnoses her with a dissociative disorder that causes her to "space out" especially when she's under stress. This might explain the gap in her memory, but it doesn't clear her.

As Elle continues to look into Charlie's life, she uncovers more and more trouble--an obsessed woman who might have been his lover. Siblings with unresolved bitter issues. A slimy untrustworthy business partner. And wealthy clients with twisted, horrific appetites.

Before she knows it, Elle is involved in more murders, a struggle for her life, and a revived relationship with Charlie, whom--for all his troubles--she has come to appreciate and love only after his death.


My Thoughts:
Charlie, Charlie, Charlie..you tricksey little hobbit! You just don't quit! This was quite a unique and fun mystery. I really was left guessing from the start til almost the last page! It's well written and clever! I had this weird nagging feeling that something wasn't right from the start, but like I just stated I wasn't quite sure what it was.

Elle was such a sympathetic and believable character. She had gone through so much and had so much emotional turmoil going on, it was really hard not to like her. She was thrown in such a weird situation, that her reactions were just so understandable!

This was a great mystery and a great book! I highly recommend it!

Sometime before Charlie moved out, I began reading the obituaries. It became a daily routine, like morning coffee. I didn’t just scan the listings; I read them closely, noting dates of death, ages of the deceased, names of survivors. If there were photos, I studied faces for clues about mortality even though they were often grinning and much younger than at death. Sometimes there were flags at the top of notices, signifying military service. Salvadore Petrini had a flag. Aged 64. Owner of Petrini’s Market. Beloved husband and father and stepfather and brother and uncle. Viewing and Life Celebration at St. Patrick’s Church, Malvern.

Some notices were skeletal, giving no details of the lost life: Sonia Woods went to be with the Lord on August 17. Viewing Friday, from 9 to 11, First Baptist Church. Service to follow. These left me disturbed, sad for the deceased. Was there, in the end, really nothing to be said about them? Were their lives just a finite number of breaths now stopped?

For weeks, I followed the flow of local deaths and funerals. I tried to surmise causes of death from requests for memorial contributions in lieu of flowers. The American Cancer Society. The Vascular Disease Foundation. The American Heart or Alzheimers Association. When there were epigraphs, I read about careers accomplished, volunteer work conducted, music played, tournaments won. Lives condensed to an eighth of a page. Less, usually.

Though the notices were brief, the words and patterns of language had a gentle rolling rhythm, comforting, like prayers, like nursery rhymes. And between listings, stark and straight lines divided one death from another, putting lives neatly into boxes, separating body from body. Soul from soul. Making death quantifiable and normal, a daily occurrence neatly announced on paper in black and white, on pages dense with ink, speckled with gray smiling photos. Smiles announcing that death wasn’t really so bad.

I don’t know why I was compelled to read those listings every day. At the time, I’d have said it had to be about the death of my marriage. After all, my own life, in a way, was ending. My life as Charlie’s wife was dying, but there would be no public acknowledgment of that demise. No memorial service. No community gathering to mourn. Maybe I read the listings to remember that I wasn’t the only one grieving, that others had lost even more. Still, I would have felt better if the obituary page included dead marriages and lost identities: Mrs. Charles Henry Harrison (nee Elle Brooks) ceased to exist on (date pending), when the couple’s divorce became final. Maybe it would help to have some formal recognition of the demise of my former self. Maybe not.

It’s possible that my own losses brought me to the daily obits. But I doubt it. Looking back, I believe what drew me was far more ominous. A premonition. An instinct. For whatever reason, though, every morning as I chewed my English muffin, I buried myself in the death notices, studying what I could about people who were no more, trying to learn from them or their photos or their neatly structured notices anything I could about death.

Of course, as it turned out, the notices were useless. None of them, not one prepared me for what was to happen. According to the obituary columns, the circumstances of one’s life made no difference in the end. Dead was simply dead. Final. Permanent. Without room for doubt. The pages I studied gave no indication of a gray area. And the boxes around the obituaries contained no dotted lines.

Merry Jones is the author of THE suspense novel THE TROUBLE WITH CHARLIE, as well as the Harper Jennings thrillers (WINTER BREAK, BEHIND THE WALLS, SUMMER SESSION),and the Zoe Hayes mysteries (THE BORROWED AND BLUE MURDERS, THE DEADLY NEIGHBORS, THE RIVER KILLINGS, THE NANNY MURDERS).

Jones has also written humor (including I LOVE HIM, BUT...) and non-fiction (including BIRTHMOTHERS: Women who relinquished babies for adoption tell their stories.)

Jones has a regular contributor to GLAMOUR, and her work has been printed in seven languages and numerous magazines. Her short story, BLISS, appears in the anthology LIAR LIAR, a project of the Philadelphia Liars Club.

In addition to the Liars, Jones is a member of Mystery Writers of America, The Authors Guild and International Thriller Writers.

For the last fifteen years, she has taught writing courses at a variety of institutions, including Temple University and Delaware County Community College. She has appeared on radio and television (local and national), and participates in panel discussions and workshops regularly.

Get a copy for yourself:

Thank you to Merry Jones and Partners in Crime Virtual Book Tours for generously offering this book to me for review.
If you'd like to join in on an upcoming tour just stop by their sites and sign up today!

Email ThisBlogThis!Share to TwitterShare to FacebookShare to Pinterest
Labels: blog tour, giveaway, the trouble with charlie