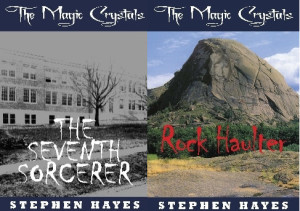 About the book:
The Magic Crystals is a story of the greatest power in the world, a power so supreme that it can control most aspects of life. Amazing if used for good, terribly dangerous if in the wrong hands, the question throughout is exactly how this power should be used.
Should it be wielded to its fullest extent to benefit all of humankind, or tamed in order to protect others from it?
Follow a group of teenagers from out in the bush as they are forced to mature rapidly as the world they always knew unravels around them. Watch as romance blossoms and is then tested by circumstance; listen as the youngsters resort to ridiculous humour in the face of danger just to find something to smile about; and above all, enjoy an intense and somewhat controversial tale of how human society can become so horribly unstuck simply due to mankind’s own insidious nature in the face of power. 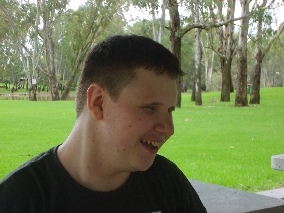 Stephen Hayes lives and writes in Melbourne, Australia. Having been born partially blind in 1986 and lost his limited vision in 2000, he started writing stories at the age of eight, winning the Harold Dickinson Memorial Australian Literary Competition for a short story about a haunted house at the age of eleven. He completed his first novella in Braille at fourteen and by sixteen, had completed the first draft of ‘The Seventh Sorcerer’.
Since 2002, Stephen has allowed his imagination to run wild with The Magic Crystals saga; sometimes pushing boundaries that today’s somewhat moral society deem to sweep under the carpet. Although classified as fantasy genre due mainly to the prominent magic component, Stephen’s writing also includes a good balance of drama, mystery, romance, humour, and he isn’t afraid to address controversial moral issues.