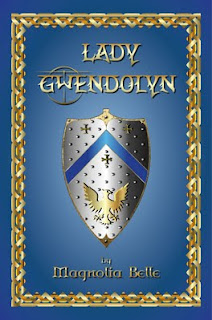 
In early medieval days, bandits beset a caravan taking Lady Gwendolyn Hampton of England to marry Angus Dewar in Scotland. In the confusion, she escapes, while the bandits think her maid, Madeleine, is her. From one peril to another, Madeleine must keep the ruse in order to stay alive. Lady Gwendolyn's brother, Lord Richard Hampton, wants Madeleine as his consort, and tries to rescue her. Through betrayal, intrigue and murder, she becomes a woman of title, and must decide if she wants the life he offers.

Author Bio:
My pen name "Magnolia Belle" came from a dream of one day owning a riverboat that offered dinner, sultry jazz and hot R&B while floating down the Mississippi. Realizing I didn't have the millions it'd take to get that dream off the ground, I took the name to write under. I figured it'd be one hard to forget. Plus, it's as southern as I am.

I live in Texas with my husband and our 'pack' of fuzzy children (aka dogs). Before that, I grew up in a military family and lived all across the US and in the Orient. In 1977, I got married and in 1978 I graduated with a degree in Accounting from Tarleton State University. Yeah, I know. BIG leap from accountant to novelist.  As editor of the University paper, I won first place in the Texas Intercollegiate Press Association Editorial competition in 1977. I was also a member of "Who's Who Among Colleges and Universities" in 1977-78, and graduated with high honors. A singer/songwriter and guitarist, I played with a band in the 1980s that made 3 albums.

I started my company, "Black Wolf Books" in 2005 as a venue to publish and sell my work. The name "Black Wolf" comes from the first series of 5 novels I've written (and am still working on).

My heritage includes at least two Indian nations, one on my mother's side and the Iroquois on my father's. Because of that, I write about American Indians with great respect. I also spend inordinate amounts of time in researching history, facts and personalities in the era they are presented.  Historical events and documentation (such as treaties) are cited in my novels, so readers can see what really happened.

My characters become very real to me, and I often find myself not writing, but rather taking dictation as they tell me their stories. That's also why I tend to write in series of novels. My characters are a gabby bunch!

This was a great historical fiction! I loved the bits of history and the wonderfully written characters. Lots of research and care was given to each scene and each sentence! This book was full of awesome writing and a fun story. The female characters are solid and dare I say it? TOUGH! I loved it!