Join Kathleen Ann Gallagher, author of the contemporary romance novel, Sun, Sand, and Seances, as she tours the blogosphere August 5 - 30 on her first Book Blast with Pump Up Your Book! 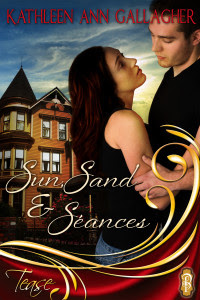 ABOUT SUN, SAND, AND SEANCES

Bobbi Collins is a caring and devoted kindergarten teacher who had her world turned upside down when her fiancé died after a lover’s quarrel. Five years later, she still struggles with acceptance. Her role as an educator fills up her week, but on weekends, she longs for something more. When she stumbles across a newspaper ad for a psychic fair in the historic town of Cape May, New Jersey, it seems like the answer. Bobbi is determined to revive her once vibrant life. Kevin Carlton a successful realtor is tired of the dating game. He doesn’t remember buying a raffle ticket, but when his co-worker announces he holds the winning number, he decides to take a chance and attend the all expense paid weekend in Cape May, at the Lady of the Sea's Psychic Fair. He hopes to find a spiritualist who has the ability to contact his late father and prove he has become a man to be proud of. Sparks fly when Bobbi and Kevin run into one another at the fair. When strange happenings occur, Bobbi rushes into her ex-boyfriend’s arms. She never imagined having a weekend of magic, memories, and a chance to rekindle the flame with her lost love. Can sun, sand, and séances cast a spell on their hearts and allow the reunited couple to find what they both desire, or will the spirits sabotage it all? 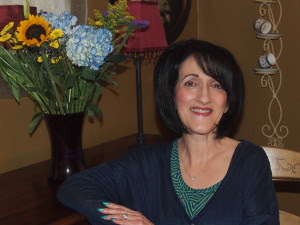 Kathleen lives in New Jersey with her husband and their two puppies. Her children are all grown, but her three grandsons keep her spirit energized. She is a registered nurse who works in an emergency room. Her passion for story telling began when she was a young girl. Since her father was a professional magician, she learned how to use her imagination while assisting him with his act. When Kathleen is not writing, her favorite place to relax is down the Jersey Shore. You might find her under an umbrella, wearing a straw hat, dreaming of a new story. Visit her website at www.kathleengallagher.net Visit her blog at http://kathleensplacetoreflect.blogspot.com