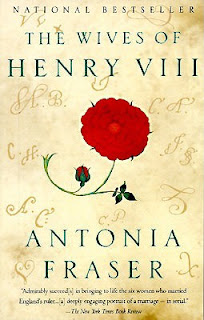 I knew the basics about the many wives of Henry, but I didn't know a whole lot. I'd just finished marathoning The Tudors on Netflix, so I was familiar with the fictional accounts of them. I'm surprised to say that while The Tudors definitely drama'd the story up a bit, they did manage to keep things a bit more historically accurate than other shows *Cough Reign Cough* (disclaimer: i loved reign, but that show was pure and delicious trash)

Anyway, on to the book and what I thought about it. First let me say this, Antonia Fraser should write every single book on history ever. Her writing style is enjoyable to read, seemingly well researched, and engrossing beyond belief. She obviously loves the subject, and knows her stuff. She definitely didn't try to swing anyone's opinion of Henry by excusing his behavior as I've seen some writers try to do. She puts everything out into the open, warts and all, and says just what happened. There was only a few "What ifs" presented and they were plausible "what ifs" Like for instance, what would have happened if Katherine of Aragon has simply accepted the offer to retire to a Nunnery instead of putting up such a long and drawn out fight for the legitimacy of her marriage? What would the course of English History look like then? That was an interesting idea that I hadn't put to thought yet.

I love art from this era, and the artwork chosen to be presented in this book was a delightful treat. Lovely pictures helped to place real (or as real as they can be since a lot of the portraiture from this time frame is mislabeled or has been destroyed) faces to the names of his wives and children. So I have no complaints there about that.

Now we get to the meaty bits of the book, the actual content. At first I was a bit worried about how the sections were divided. Katherine of Aragon had a HUGE chunk of the book, while Anne of Cleves and Katherine Howard had combined chapters. However, this is something that makes a lot of sense when you get down to it. Katherine of Aragon was his wife the longest, and of course she was his first. I'm not complaining about the focus on KoA because basically she was HBIC. She, in my opinion, was the only one to truly love Henry. She fought so hard for their marriage, even when he basically threw her away to fend for herself so he could marry Ann Boleyn. She proclaimed her love and her commitment to him all the way up until her death.  KoA could have been the whole damn book and I'd be super happy.

Each Queen had a section, minus of course the Anne of Cleves and Katherine Howard bits. Both of them are fascinating women in their own right, but definitely a flash in the pan in the King Henry saga.  Poor Katherine Howard though, that's all I gots to say about her. So many dumb decisions, but then again who didn't make dumbass choices when you were a TEENAGER? She never stood a chance.

There were so many scandals, beheadings, affairs, and of course changes that took place during King Henry VIII's reign that this story will always be remembered and always be on peoples minds. This I feel is one of the best written that I've read (and I will admit I haven't read that many yet) so far. If you are Tudor History buff, I do suggest it.