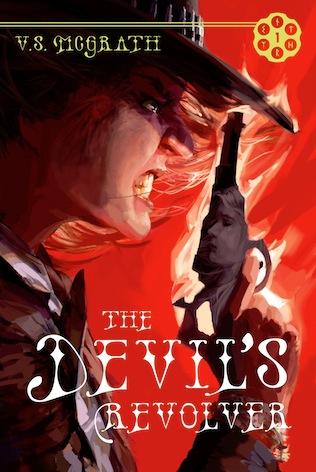 
She is Hettie Alabama — unlikely, scarred, single-minded, and blood bound to a revolver forged by a demon.
The first book in an epic, magic-clad series featuring the Wild West reimagined as a crosscultural stereoscope of interdimensional magic and hardship, The Devil’s Revolver opens with a shooting competition and takes off across the landscape after a brutal double murder and kidnapping — to which revenge is the only answer. Hettie Alabama, only seventeen years old, leads her crew of underdogs with her father’s cursed revolver, magicked to take a year off her life each time she fires it. It’s no way for a ranch girl to grow up, but grow up she does, her scars and determination to rescue her vulnerable younger sister deepening with every year of life she loses.
A sweeping and high-stakes saga that gilds familiar Western adventure with powerful magic and panoramic fantasy, The Devil’s Revolver is the last word and the blackest hat in the Weird West.

Author Bio:
Vicki So, writing as V. S. McGrath, is a published romance author (as Vicki Essex) and has six books with Harlequin Superromance: Her Son’s Hero (July 2011); Back to the Good Fortune Diner (January 2013), which was picked for the Smart Bitches Trashy Books Sizzling Book Club; In Her Corner (March 2014); A Recipe for Reunion (March 2015); Red Carpet Arrangement (January 2016); and Matinees with Miriam (November 2016). She lives in Toronto, Canada.