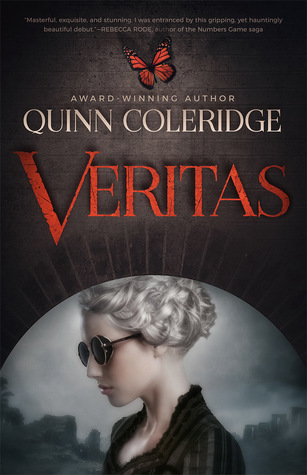 
The ghosts are angry, thinking I’ve neglected them.
Do not forget us, they call out from the grave.
I won’t, I promise them. Upon my life, I won’t.
Being a demigoddess in 1892 Stonehenge, Colorado isn’t all one might suppose, especially when the dead are involved. Yet as Veritas of the Rocky Mountain sovereignty, it is Hester Grayson’s calling to help restless spirits cross over by bringing their killers to justice. Blind and pale as an albino, she dwells on the fringes of the nouveau riche, working with her telepathic beau Tom Craddock to catch the guilty.
When a young woman is brutally murdered, Hester and Tom are determined to solve the case as they have every other. But this one demands more. The killer wears many faces and wields greater magic than even Hester possesses. All sleuthing stops, however, when Tom is gravely wounded, and Hester is cast out of her parent’s mansion into the brutal squalor of an asylum.
At the mercy of an insane doctor, surrounded by agitated ghosts, Hester fights to maintain her own sanity by planning her escape and the downfall of her enemies. Can she achieve her goal and expose the madman who sent her to hell? Or will he continue his bloody reign in Stonehenge?

Goodreads / Amazon
—
EXCERPT:
My prayer for relief goes unanswered, and faces flash through my mind. Those I saw in my last vision, the one initiated when the doctor touched my skin. Men, women, old, young—they appear and blur a moment later, shifting into the next person. All of Faust’s victims are deep-branded inside me. They are angry, thinking I’ve neglected them.
Do not forget us, they call out from the grave. I won’t, I promise them. Upon my life, I won’t.
The ghosts tell me to find the Book and steal it. Escape the asylum and expose Faust to the world. Let him answer for every crime, they say, condemned by his own words. If only these spirits could be a bit more specific. How exactly do I escape to do their bidding? Have they any suggestions? But the dead only wail and cry for justice. Blasted ghosts always leave the finer points of the plan for me to figure out.
Further enraged by my hesitation, they cause me to burn hotter. All right, all right, I reply through my psyche. As you wish, I so promise. Truth vibrates through the Pit, and the dead finally set my body free. They have accepted my vow, for the moment, but might be less forgiving tomorrow if I don’t take action. I work for a very impatient crowd.
Most people belong to another in some capacity, as a daughter or son, a sister, spouse, or neighbor, but the inmates of this place have been forgotten. They have no one to speak for them, or to avenge their wrongs. And so I’m here, dumb and blind, to serve as the mouthpiece of the wretched, whether I like it or not. That brazen hussy Fate does love a paradox.
Ironically, serving the dead gives me a reason to live, to go on breathing each day. It answers Hamlet’s eternal question of whether to be or not to be with an affirmative. That is why I crawl about the Pit on my knees, searching for a palm-sized piece of metal. It has been hidden and used many times by the inmates before me. I find the broken iron strip and turn toward the northern wall. The rough surface is covered with spider webs and dirt, but something else as well.
Words.
Hundreds of them have been scratched into the crumbling stone with this strip of iron. I trace the curves and the straight lines of the letters, as I did with my alphabet stencils at home. Of sound mind, one inmate wrote, never insane. In another place, I find Hungry, God Sees, and Died Alone. I scrape the iron against rock. Over and over, until each letter is formed, perfect and smooth. Wiping the sweat from my brow, I blow the dust away from my masterpiece, my call to arms.
LEX TALIONIS
YOUR DAY OF RECKONING AWAITS, FAUST