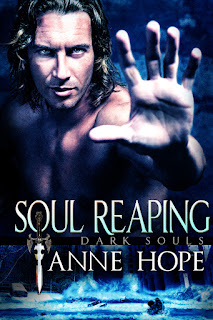 Tagline: To save the world he damned, he must sacrifice everyone he loves.

For six millennia, Cal has fought to guard mankind against the evil he unleashed upon it—his offspring, the Nephilim. Now, in order to avert another Great Flood, he must unite the Sacred Four. Problem is, one of these souls once cost him his grace and shattered his all-too-human heart.

Four years ago, Kleio awakened in an unfamiliar body to find her reality completely altered. Her only desire is to see her husband again. When Cal finally comes for her, she believes her prayers have been answered. Until she realizes the Watchers’ leader is nothing like the passionate angel she remembers.

Cal fights his sinful attraction to the woman who led to his fall, aware that for the world to be saved, the Sacred Four must die. But Kleio is determined to make him feel again. For the first time in centuries, he questions his dedication to his mission. When the floodgates open, will he have the strength to sacrifice everyone he loves or will he damn humanity a second time?

For four years she spoke his name each night before she drifted off to sleep and each morning when she awoke, but he never came for her. There was a time when all Kleio had to do was think of Calliel and he’d appear, a glorious winged warrior with piercing silver eyes and hair as golden as the sun.
Even when he’d fallen, their connection hadn’t waned. It had grown stronger.
But now, in this futuristic world, where light came from glass bulbs and food could be warmed at the touch of a button, whatever bond had linked them to one another had been severed, setting her adrift.
So she’d adapted, learned these people’s tongue, figured out how to operate their strange new-world machines and live as one among them. They called her Daphne, like the tiny pink and white flowers that had once bloomed in her courtyard. At first she’d argued that her name was Kleio. Whenever she did, her new family would give her that sad, mournful look and a smile meant to pacify, then go right back to calling her Daphne.
In time, she’d accepted the name along with her new life, but not a moment went by when she didn’t wonder about Calliel. What had become of him, of their son, Athanatos? She’d given her soul to save her boy. Why then was she suddenly free?
She’d spent countless hours catching up on her history, trying to understand what had transpired in the past six millennia while she’d slumbered. What she’d learned both fascinated and horrified her. Her entire civilization’s history had been wiped away, all the progress her small village had made thanks to the angels erased and forgotten. Historians called her time period the Neolithic era, neos lithos, the new Stone Age.
How insulting. Her people had invented farming, weaponry, pottery, sculpting…and yet, according to the great minds of today, they’d been no better than monkeys, running around swinging wooden clubs.
She didn’t blame historians for their faulty assumptions, though. She blamed the heavens. As Calliel had feared, a Great Flood had come, wiping out most of humanity...and her history along with it. It had taken thousands of years for mankind to achieve the progress her small civilization had enjoyed in the so-called Stone Age, all because the angels had thrown a temper tantrum.
Kleio couldn’t help but wonder, had the flood wiped out the fallen and their cursed offspring as well?
She couldn’t bear the thought of existing in a world without Athanatos, without Calliel. And yet here she was, imprisoned in a home she could never call her own, living with a family who insisted on addressing her by someone else’s name.

“Daphne, darling, are you ready?” Joyce shuffled into the living room, a large purse strapped over her shoulder. “We’ll have to leave soon if we’re going to beat the Christmas rush.”
Christmas, short for Christ’s mass, meant to celebrate the birth of Christ, yet another pivotal event she’d slept through. “Sure, Mom. Let’s go.” She’d promised Joyce she’d go shopping with her, and Kleio wasn’t one to break a promise.
At first, pretending to be Daphne had been both physically and emotionally draining, but in time it had gotten easier. Joyce and Theo had taken her in, given her a home, helped her recover from her injury. The least she could do to repay them was allow them to believe their daughter had survived the car crash and her subsequent coma.
They had just pulled the plug on the machine that was keeping Daphne alive when Kleio had awakened in the deceased woman’s body. No wonder they’d looked at her as though they’d seen a ghost.
Kleio pulled on her jacket and followed Joyce to the car, tightening the scarf around her neck as a light drizzle began to fall. The probability of a white Christmas in San Francisco was low, but December was rainy season and considered one of the coldest months of the year.
Once ensconced in the white Audi, Joyce gave her a wistful glance. “We used to do this all the time when you were little. You always begged me to take you to Union Square so you could see the Christmas tree.” Joyce watched Kleio for a reaction, hoping against hope that a memory would miraculously unfurl in her mind.
Kleio simply smiled, saddened by the desperation she caught in the woman’s soulful brown eyes. She understood better than most the agony of wishing for something that could never be. “We can pass by and see it, if you like.”
A gleam of pleasure cut through the pain, and Joyce beamed. “That’s a wonderful idea, darling. Maybe—” She didn’t finish her sentence.
Then again, she didn’t have to. Kleio knew exactly what the woman had been about to say.
Maybe the tree will trigger a memory, the past four years will melt away, and you’ll be my Daphne again. Then I’ll stop seeing a stranger each time I look at you.
The rain picked up speed, pummeling the windshield with violent fists. Dark, churning clouds gathered in the distance, blocking all traces of the sun. Funny, the forecast hadn’t called for a storm today.
“I’m starting to think this wasn’t such a good idea.”

“Nonsense.” Joyce kept a firm grip on the steering wheel as the car coasted forward. “It’s just a little rain.”
Cars. That had been the greatest adjustment of all. Who would’ve thought that in the future people would travel around in steel boxes, catapulting forward at inhuman speed?
When they neared the Golden Gate Bridge, Kleio gripped the door handle, as though the futile act could protect her from a two-hundred-foot plunge into San Francisco Bay. The three-mile long suspended bridge always sent ice chips skittering along her spine, and today was no exception.
Joyce assumed her fear stemmed from the car accident Daphne had suffered, and Kleio didn’t bother to correct the woman’s misconception. What could she say?
I hail from a time when the only means of transportation were a stubborn mule and a pair of scuffed sandals. Oh, and let’s not forget the angels.
She’d flown with Calliel a time or two, before he’d been ruthlessly stripped of his wings. She remembered what it had felt like to soar thousands of feet from the ground, the world below fading, becoming a tangled blur of shapes and colors. With his arms fastened around her, she’d felt safe and ridiculously happy, as though there wasn’t a force in heaven or hell powerful enough to pry her from his grasp.
She’d been wrong.
The wind blustered, shaking the vehicle until it groaned. The bridge seemed to rattle beneath them, and fear snatched the air from her lungs. “Turn back.”
“I can’t.” Joyce gave her a sympathetic grin. “We’re almost there. Don’t worry, honey. We’ll be fine.”
No, they wouldn’t. This was no ordinary storm. Kleio felt it in her bones. Darkness swept over them, cold and greasy and familiar.
The bay suddenly bubbled. Similar to a leviathan rising from the depths of the sea, a giant wave surged, accumulating in mass as the car arrowed forward. Surely, the swell couldn’t reach two hundred feet in height, could it?
Kleio closed her eyes, uttered another desperate prayer. “Calliel, where are you? I need you.”
The darkness thickened, finding purchase in her soul. With a thunderous whoosh, the wave crested over the bridge, washing everything from its path. Joyce screamed as she lost control of the Audi. The sedan flew sideways, sweeping across the blacktop in a graceful glide reminiscent of Cal’s wings.


Then, with an ear-splitting clang, it breached the metal barriers and plunged, nose-first, into the hungry bay.

“A Thousand Years” by Christina Perri

Cal has loved and mourned his wife for six thousand years. Now, fate has seen fit to resurrect her, but Cal is unwilling to risk his mission…or his heart. Kleio is the reason he fell, the reason he damned all of mankind, and he fears if he lets her in, history will repeat itself. But her loneliness matches his own, and emotions he thought he buried ages ago keep rearing up within him. If he’d not careful, he may very well end up falling all over again.

Cal is an angel battling both inner and outer demons, and no matter what it costs him, he can’t stop fighting. This is a battle he can’t afford to lose because he is humanity’s only hope.

“Angel” by Theory of a Deadman

Kleio and Cal are worlds apart, as different as the earth and sky, and yet they challenged the heavens to be together. Cal thinks loving Kleio makes him weak, that he’ll fail to fulfill his mission because he’s unable to let her go. As for Kleio, she’s loved Cal for ages, blinded by his light. Her love was selfish, robbing him of his wings and his grace. To save the world she helped curse, she much find the willpower to finally set him free.

“Let’s Hurt Tonight” by One Republic

Cal and Kleio’s love has brought them nothing but pain, and yet they can’t seem to walk away from it. It’s in their blood, in their veins. When it comes to their relationship, love and pain are so intricately linked, they can’t experience one without the other.

This song could have been written for Kleio. She longs to be worthy of Cal, to be the warrior he needs her to be. She’s willing to go into battle with him, to shoulder the weight of the world alongside him, to help him restore balance to a universe overrun by darkness. But she’s only human, and this fight will eventually break her.

Cal, Leader of the Watchers 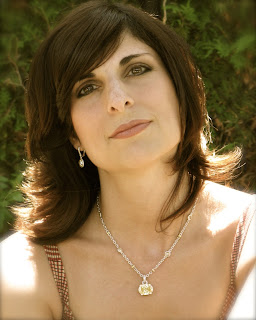 Anne Hope is the author of emotionally intense romances with a twist—a twist of humor, a twist of suspense, a twist of magic. All her stories, however, have a common thread. Whether they make you laugh or cry or push you to the edge of your seat, they all feature the redeeming power of love and the heart’s incredible ability to heal.

Anne’s passion for writing began at the age of eight. After penning countless stories about enchanted houses, alien girls with supernatural powers and children constantly getting lost in the woods, she decided to try her hand at romance. She lives in Montreal, Canada, with her husband, her two inexhaustible kids, a lazy cat and a rambunctious Australian Kelpie. 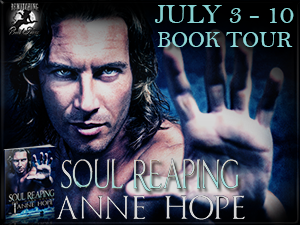