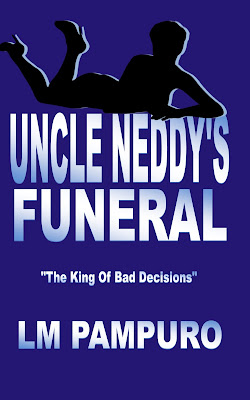 Giuseppe Vittorio Vaffanculo, a.k.a. Neddy, is not a bad person, he just holds himself in high praise. Neddy is the perfect target for Rayleigh O’Connor, member of an underworld organization and soon to be Ms. Neddy number five. As part of the Vaffanculo-Cuzzuto clan, Neddy is the perfect mark Rayleigh needs to avenge the death of a comrade by killing Victor Cuzzuto.

All Victor Cuzzuto wants to do is finally retire to the beach, spend time with his family, and hand over the reins of his Federal Investigation branch office to his protégée, Bruno.
Uncle Neddy’s Funeral - The King Of Bad Decisions.

“Brothers and sisters, we have come to say good bye to our brother, Giuseppe Vittorio Vaffanculo.”

“For crying aloud did this guy even know Neddy?” Gia hissed in her sister’s ear. The middle child of the Vaffanculo relations, Gia sat with arms folded across her satin black dress, in her opinion, a beautiful garment wasted on a funeral. Her eyes volleyed between the crowded sanctuary and the man standing at the podium. Her younger sister by a year, Amelia, stared at the priest with intent. Her eyes tearing at the mention of her favorite uncle’s name.

“Giuseppe was an exceptional man: father, brother, son…” as the priest paused a moment Amelia glanced over at her ninety-year-old grandmother who sat playing with her false teeth. She nudged her sister in grandma’s direction. Grandma, dressed in traditional funeral black, included the customary laced veil, now thrown haphazardly over her head. Grandma Lena swished her teeth around her mouth, popped them through her lips, then caught the full set in her hand. Not a bit of spit followed. Without missing a beat she’d place the choppers back in to start again.

“Oh, this is going to be entertaining,” Gia smirked.

“Giuseppe was a fine man who loved his wife…”

“Which is he referring to?” Amelia giggled.

“Only those he knew about…” without missing a beat Gia responded.

“…And was a wonderful son…” a “humpf” came from the direction of their grandmother. The girls watched their mother squat walk towards grandma. She knelt in front of her, rubs the old lady’s arm, as she whispered something in her ear.
Grandma turned around and flicked her wrist in her daughter-in-law’s direction. The girls’ eyes grew wide.

“We would get slapped,” Gia pointed out to a nodding Amelia. Their mother just shrugged stood fully erect, walked back to her seat. Her face expressionless.

As the priest continued to extoll virtues her uncle never possessed, Gia looked around the crowded funeral home. Bright purple flower arrangements lined the wall then veered around the back of the casket. Family and friends sat, stood, and waited in the adjacent rooms, spilling outdoors under the canvass walkways to pay respects. She knew most of the folks around here all her life, some by reputation, most by some sort of relation.

“Giuseppe was a pillar in the community. He had a big heart…”

“Are you sure he’s talking about Uncle Neddy?” Amelia said.

“I don’t think this one had met him. He’s new. Remember, straight off the boat from the mothership,” The priest appeared to be moving around the alter to avoid stepping in something.

“Ship…Land…Tomato…Tomato… What is the difference? The guy knows nothing about our family or the person he is talking about.” Gia moved her right hand as she spoke, the same mannerism her mother and grandma used.

“Well he knows some stuff…”

“Yeah, what is on the script. Aunt Neddy the fourth wrote it up or do you think she’d let the fifth to be do the eulogy?”

“I think she’d rather be reading the fifth to be’s eulogy.” As both girls began to snicker Gia glanced up in to their mother’s warning glare. In silence Angela Victorio Cuzzuto Vaffanculo held up one finger. Gia nudged her sister. She gave a head nod towards their mother. Elegantly she raised a second finger. Her dark blue eyes never wavered.

Both Gia and Amelia gave a slight nod, leaned back in their chairs. Legs crossed at the knees they mirrored each other’s worried glances, unconsciously tapping their bottom foot. Angela relaxed a little in her chair. To her left, her husband Joe, snored quietly. Angela poked his arm. He would jump a little, smile at her, only to close his eyes again.

He held her left hand in his. Every so often she would feel a gentle squeeze. Ah, my Joseph, he works so hard at the restaurant. Still cleaning up his brother’s messes. She thought, so he’s napping. He is not disrespectful. It’s his brother’s funeral not mine. He’s better not nap at my funeral. A laugh escapes from her lips. Who am I kidding. I will bury him first. Here, a little nap hurts no one. Uhg – look at the line – I’m sure half are here because they love Neddy, the others want to make sure he’s dead. Her lips turned up into a discreet smile. Iksch – This is all good. All these people here. This will help us with our situation. I wonder how many know? She glances at her mother-in-law who now moved from playing with her teeth to eating what looks like a pignoli cookie. Now where did those cookies come from? Crumbs float down the old lady’s face. Angela nudged a tissue into Enzo’s hand. She pointed towards the older lady. “Oh, for crying aloud,” he proceeded to float down the row to the matriarch’s side, causing as little commotion as possible.

“Mrs. V, you need to stop with the cookies,” he reprimanded in a hushed voice the people in the back of the room could hear.

“You are not ninety, you are only eighty-five.”

“The stunad caused me so much stress I aged five years.” Enzo bit the inside of his cheek yet the grin across his face gave him away.

“I understand, but still, it is disrespectful to be chowing down at Neddy’s…”

“What’s disrespectful is having this idiota talk about someone her never met!” As the word idiota came out of the old lady’s lips, all those in close vicinity did the sign of the cross. The gesture continued down the rows like the wave at a football game.

L.M. Pampuro is the author of five novels: Dancing With Faith, Maximum Mayhem, The Perfect Pitch, Passenger – the only game in town, and Uncle Neddy’s Funeral. (All available at Amazon.com)
She is an avid skier, loves dancing to live music, and possess a warped sense of humor

L.M. Pampuro will be awarding a $25 Amazon or Barnes and Noble GC to a randomly drawn winner via rafflecopter during the tour.
a Rafflecopter giveaway
at July 11, 2017