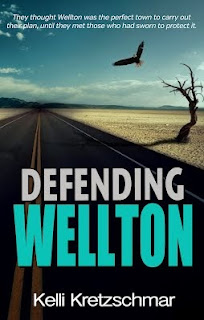 Wellton, Arizona. Population 2,864… and falling. Something - or someone - is killing the kids in town, and the Wellton Police Department is called in to investigate the untimely deaths.
Officer Trent Buckley has lived in Wellton since the day he was born, and he’s been trying to get out of the small, dead-end town ever since.  Just when he has a shot at a transfer to Tucson, a disturbing case lands in his lap, one that has him working with Yuma Sun reporter – and ex-lover – Sarah Goodwin.  Trent is forced to push aside his resentment for Wellton and settle his own personal demons to focus on keeping more kids from dying in his town.
Chief John Walker has lived in Wellton for over thirty years.  When kids start getting sick and dying, it takes all his courage to face his own past and solve the case.  With the help of his best cop, Officer Buckley, Walker is determined to stop the deaths in his town, and keep them both alive in the process.
As the pair discovers what, or who, is behind the mysterious deaths, will two small-town cops be able to stay alive long enough to put a stop to it before any more kids have to die?