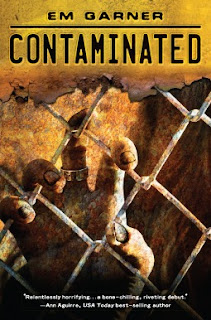 After the Contamination—an epidemic caused by the super-trendy diet drink ThinPro that turned ordinary citizens into violent, uncontrollable creatures—the government rounded up the "Connies" to protect the remaining population. Now, two years later, the rehabilitated are being allowed home, complete with shock collars that will either control, or kill, them.

Velvet Ellis has struggled to care for her ten-year-old sister since her parents were taken in the round up. When she finds her mother in one of the "Kennels," Velvet resolves to do whatever it takes to put her family back together. But the danger isn’t over. It’s beginning all over again…

Gritty and grabbing, Velvet is a harrowing, emotionally charged novel for fans of Carrie Ryan and The Walking Dead


My Thoughts:
You guys know I love a good zombie book. It's one of my favoritest genres ever! So when I read the blurb I got all kind of excited about this new take on how the plague starts! I mean seriously? How many people AREN'T on some sort of diet aid? That thought alone is enough to scare the bejesus out of you! Then to have the ingredient that makes you lose the weight be the same thing that makes you go nutso! EEEK! So needless to say I snatched this book up from Netgalley asap!

The nuts and bolts of this book are great. Velvet is a strong young girl and has a great heart. She's got a lot on her shoulders and she shows her maturity and responsible nature many many times. Her little sister Opal is cute too. She's whiny at times, but she's still young. So her character rang pretty true on that account. The basics of the story are all there. The outline is solid, it's just when you get to the meaty bits that things sort of fall flat.

There are moments when this book feels rushed. The ending seems a bit..well I'm not going to spoil it, but it just didn't seem realistic to me. In a zombie or connie apocalypse I do not expect things to be a happily ever after kind of story. The main irk I had was that there is too much telling and not showing in this book. We heard that things were bad but all we really saw was a bus driver being mean to Velvet, a principal being shifty, and a thug being..well thuggish. The danger didn't come across as real. It felt like Velvet and Opal were in a bubble and things were just cozy and tidy.