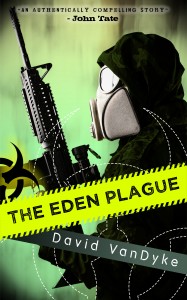 A thriller/military science fiction apocalyptic technothriller.  BOOK 1 OF THE SERIES.

Rule #1: Try not to shoot your future wife. When special operations veteran Daniel Markis finds armed invaders in his home and it all goes sideways, he soon finds himself on the run from the shadowy Company and in possession of a biological breakthrough that might throw human society into chaos. Out of options, Daniel turns to his brothers in arms to fight back and get the answers he needs. Soon he takes possession of a secret that threatens the stability of the world, as he leads a conspiracy to change everything.
This thriller leads readers into the exciting and engrossing Plague Wars military science fiction series.
The Eden Plague is a science-fiction military techno-thriller in the tradition of Michael Crichton, Dean Koontz, with shades of David Drake, Jerry Pournelle, S. M. Stirling, Vaughn Heppner and B.V. Larson. Second Edition.
Buy Now @ Amazon
Genre – SciFi /Adventure
Rating – PG13
More details about the author
Connect withDavid Van Dyke on Facebook &  Twitter
Blog https://davidvandyke.wordpress.com/

I thoroughly enjoyed this action packed book. It's definitely one that you wanna set aside a good few hours of your life for. You start reading and you won't wanna stop. Daniel is a smart, yet flawed main character that you root for from almost the very beginning.

The best part about this book is how smoothly things progress. Sometimes in books like this the action feels a bit herky-jerky, but everything moves at a pace that makes sense. The characters react in believable ways and make logical choices. BIG BONUS right there! Some writers forget or hurry up their action so they don't lose the reader's interest. Instead, it seems like things here simmer for a bit then boil over...settle down then simmer up again. I LIKED that a lot!

So good story. Good writing. Good characters. A solid start to a series! I enjoyed it very much!