Blog Tour and Guest Post: Down and Out in Beverly Heels 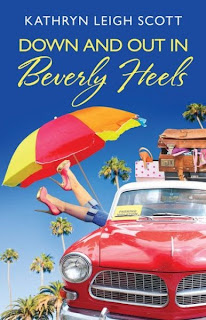 Meg Barnes, a beloved actress for her role as TV detective Jinx Forgarty,  has it all but thanks to her newlywed con-man  husband,  loses everything and ends up living on the streets of Tinsel Town in her Ritz-Volvo. This fun, light-hearted romance takes us into the Hollywood social swirl, but also delves into the gritty truth of what it is to be “homeless and hiding it” in one of the most glittering, fashionable cities in the world. It’s also a story of redemption with a “Thelma and Louise” twist as Meg, incorporating skills she learned as a TV detective, tracks down her fugitive husband and struggles to regain her reputation, career and friendships.

Purchase your copy at AMAZON. 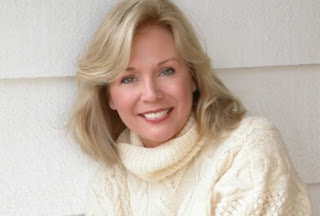 Kathryn Leigh Scott is an actress, probably best known for creating the roles of Josette DuPres and Maggie Evans, the love interests of vampire Barnabas Collins in the cult classic TV show “Dark Shadows.” Down and Out in Beverly Heels is her second work of fiction. Scott wrote Dark Passages, a paranormal romance, with more than a passing nod to the ‘60s soap and she appeared in the Johnny Depp/Tim Burton film Dark Shadows last year.

Scott is currently at work on a sequel to Down and Out in Beverly Heels.

This was a spiffy little book. I liked that even though Meg's situation wasn't as sparkly as it used to be, she didn't dwell and still retained her spunk! She's a smart gal and uses that noggin to get by on what she has.

The main theme running through this book is "Where is Paul?" and "Did she know about his scams?" which were pretty intriguing questions. I enjoyed watching her keep her chin up and deftly go about proving her innocence in the face of those that doubted her. This is when things take a really interesting turn.

I won't spoil it, but bodies are found. Threats are made and Meg has to tap into her famous character from the past, Jinx, to help her figure out what is going on!

This is a fun, popcorn (and I mean that in a good way) kind of book. I gobbled it up in one sitting!


Actress Meg Barnes, homeless and living in her car, hopes to spend the night in a safer place than parked at the curb of a local park for the night. She needs a good night’s sleep because she’s got a job guest-starring in a TV pilot.

I park up the street in a cul de sac off the main road. Then, my overnight bag slung on my shoulder, I slip through a break in a boxwood hedge. In the shadow of a sycamore tree, I pause, listening to the sounds of the night. The lights are off in Marjorie Singleton’s house, my benefactor tucked in for the night. I don’t know Marjorie well, though whenever I voted,  it was in Marjorie’s clean, spacious garage, her Bentley parked on the street to make way for a bank of polling booths on election day. I’m sure Marjorie, if she knew, would be only too happy to extend a neighborly welcome to me.
It’s Wednesday: Marjorie’s son, who lives in Encino, is home with his family and won’t stop by again until Friday afternoon, when he’ll bring her Chinese takeaway. I know the rituals; I’ve watched Jake Singleton come and go. This is a safe night, and all is quiet.

I follow the flagstone walkway around the swimming pool, past the rose bed, and turn the knob on the side door to the garage. It’s unlocked, as usual. Inside, I slip quietly along the west wall to the workbench Marjorie’s long-dead husband built, and set down my carryall. I plug my laptop and cellphone into a wall outlet to top up, then move through the darkness to Marjorie’s Bentley. She rarely drives it anymore.

I toss my sleeping bag into the back seat. Tonight I can pack in a good six hours and be gone before the gardeners arrive. On those nights when I’ve had to spend the night in my own car, I remain fully clothed, doors locked, windows open no more than a finger-tip wide.

Usually I find a spot on the street around Holmby Park, the gates to Aaron Spelling’s mansion within spitting distance. Should his ghostly presence be hovering above his former abode, I can imagine his bemusement seeing me camping out a stone’s throw from his old bedroom window. I still get residuals from his shows, blessed checks from repeats of mindless fluff that pay my car insurance and buy me another month at the health club. But those nights parked on the street, hiding under spread newspapers, even with the tinted windows, are the tough ones, the only time it really hits me that I’m homeless.

More accurately, I am without a home. I am not actually a Homeless Person. I always manage to have a roof over my head, even if it comes with four wheels and a dashboard. I’m not a bag lady, a bum. I’m not a thief, though I suppose I’ve stolen a few pennies’ worth of kilowatt juice from Marjorie. But the back seat of an old lady’s car is only temporary accommodation, not Home, Sweet Home. I awaken too often in the night, dozing more often than sleeping.

I slide my legs deeper into my sleeping bag and hug my arms for warmth, trying to stop the rat-wheel of worry spinning in my head. I am far from complacent about the fix I’m in, yet I manage to drift off in welcome sleep.

Moments later—or is it hours?—I’m fully awake and alert, every fiber of my being a listening device. What is it? What did I hear? My heart bangs in my ears as I strain to sort out the sounds. The irrigation system kicking in? A squirrel on the roof?

Hearing footsteps falling softly on the flagstone walk, I slide free of my sleeping bag. Who’s coming for me? Who in hell knows I’m here? My fingers close around a small can of pepper spray. I don’t even know that the aerosol works. The container is old and I’ve never had occasion to test it.
The garage door scrapes open. A beam of light arcs across the windshield. A male voice booms. “C’mon out. Now!”

… It’s my Margot Kidder nightmare, a “caught-in-the-headlights” shot of myself disheveled, my arms clutching a sleeping bag, splashed on the cover of a supermarket tabloid: “Former ‘Holiday’ Star Down and Out in Beverly Hills!”

Tears sting my cheeks. Wouldn’t the paparazzi love this shot? Jinx, face puffy, mascara smudged, lurking in someone’s garage. I press my forehead into my sleeping bag, recalling poor Margot, missing her front teeth and in need of meds, cowering in someone’s backyard. What’s my excuse? If I’m busted now, it’s the end of my job next week, the end of pulling myself out of this confounding mess I’m in.


Excerpted from  Down and Out in Beverly Heels by Kathryn Leigh Scott, © Montlake Romance 2013

Megan Draper, in an episode fatefully titled “Dark Shadows,”pokes fun at another actress who is auditioning for a role on a soap featuring vampire Barnabas Collins—the show I happened to be in from its first episode in June, 1966. Megan’s trajectory as a young actress launching a career in New York seemed to mirror mine―that is, until we bumped up against Episode 9 in Season Five of “Mad Men” in which she described “Dark Shadows” as a “piece of crap.” I am admittedly prejudiced, and more than a little defensive, about the cult Gothic series that “every kid ran home from school to watch”—but 47 years later, I am also still collecting residuals on the 1,225 episodes!

I realize Megan’s character has been constructed with a larger dramatic purpose in mind, over which she has no control, so I can hardly blame her for a path not pursued. But Megan subsequently takes a role on another soap, in which she plays two characters, and seemingly worries constantly about being fired.

“Dark Shadows” was also my very first job on television and I ended up playing four characters during the four-year run of the show. Unlike Megan, I was not terribly concerned about being dropped from the series because no matter what role I played, I was always the main squeeze of Barnabas Collins, arguably the template for all modern-day vampires. Our love scenes involved fangs, bats, bites and a good deal of fake blood, all of it presaging Twilight, True Blood and Buffy, The Vampire Slayer.“Dark Shadows” actors were never concerned about being killed off because we inevitably came back as another character in another time period.

For whatever reason, show creator Matthew Weiner chose to place Megan on a troubled soap that she feels will stymie her career.  But “Dark Shadows” was the launching pad for many of us who wereregulars on the series, including Kate Jackson;appearing in guest roles were Susan Sullivan, Donna McKechnie and Marsha Mason. If Megan had got a role on our show, she may also have had a crack at starring in an MGM feature film based on the series. In 1970, I starred with Jonathan Frid, Joan Bennett and Grayson Hall in House of Dark Shadows, which was a critical and box office success that helped save the studio from bankruptcy that year.

Megan would also have had a chance to develop her acting chops doing period drama on stories drawn from classic literature: Jane Eyre, The Picture of Dorian Gray, The Scarlet Letter, Wuthering Heights, Dr. Jekyll and Mr. Hydeand The Turn of the Screw, among others. While other soaps were largely domestic dramas where characters gossiped over coffee, Dark Shadows actors were doing stories involving the paranormal and time travel in what was virtually a classic anthology series.
We had our own repertory company of actors, all of us playing multiple roles, working with wonderful, innovative directors—including, Lela Swift, an award-winning woman director in the pioneering days of “live” television.What other soaps featured original orchestral music? Bob Cobert composed the evocative theme music for “Dark Shadows,” with a number of his compositions appearing on the Billboard charts. For its time, the period-accurate sets designed by SyTomashoff far outshone anything one could see on the other soaps of the day, all of it crammed into tiny ABC Studio 16 on West 53rd Street. What a great opportunity for young actors to hone theirskills, working with wonderful veteran actors in a show that afforded so many challenges playing completely different characters with different accents in different centuries.  Aside from that, the show was great fun!
Dan Curtis created a classic with “Dark Shadows” and secured his legacy with “Winds of War” and “War and Remembrance.” Thanks to Dan,“Dark Shadows”lives on, attracting new generations of viewers to the series on DVD. It’s still a fun—and Megan Draper could have joined us for the ride!

Dark Shadows actress and author of Dark Shadows: Return to Collinwood and Dark Passages,has written the newly-published mystery romance Down and Out in Beverly Heels.www.kathrynleighscott.com.