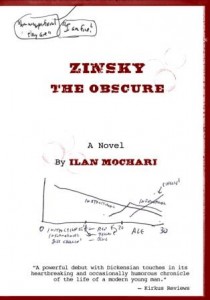 Thirty-year-old Manhattan bachelor Ariel Zinsky is still recovering from his abusive childhood when he realizes no one — including his few living relatives — is truly interested in his narrative. While they numb themselves with the latest celebrity rehab story or the third-world atrocities replayed without ceasing on cable news, he sets out to write his autobiography as an exercise in his own self-medication, recasting himself as the hero in a coming-of-age story. Fans of A Confederacy of Dunces and The Perks of Being a Wallflower will relate to this tale of overcoming your childhood’s traumas, and the world’s indifference to them.
Warning: this book contains graphic sexual content and violence; it may not be suitable for all readers.


Zinsky the Obscure was chosen by Radio Boston as one of their Good Reads for the Summer! 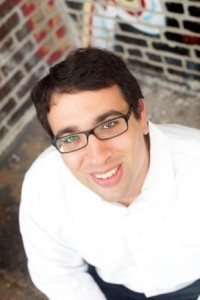 Ilan Mochari’s novel, Zinsky the Obscure (Fomite Press), has earned rave reviews from Publishers Weekly, Kirkus Reviews, and Booklist. Ilan’s short stories have appeared in Keyhole, Stymie and Ruthie’s Club. He is a contributor to Cognoscenti, the online magazine for Boston’s NPR News Station. He has a B.A. in English from Yale University. He used it to wait tables for nine years in the Boston area.
Find out more about Ilan and Zinksy the Obscure at zinskytheobscure.com. You can read a review of Zinsky the Obscure in DigBoston, as well as an interview with the author. Check out the radio interview as well.

This is not going to be everyone's cup of tea. I'm not even sure I liked Ariel Zinsky, but I liked this book. It's honest, dark, and at times so very touching. I could not put the book down. The characters and the story were very nicely crafted. Ariel Zinsky is a very lonely man. He's got tons of baggage from his childhood, which shadows his happiness later in life. His emotional growth has been stunted. He knows what he wants, yet he is unable to accomplish his goals simply because he does not know how. I found him very complex and very sympathetic, yet at the same time I also was disgusted and disappointed at his lack of awareness.


Zinsky is a character that will not be easily forgotten, and Mochari is a writer I will keep an eye on!

Email ThisBlogThis!Share to TwitterShare to FacebookShare to Pinterest
Labels: tlc, zinsky the obscure