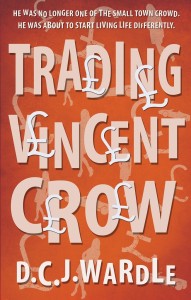 Vince Crow had heard somewhere that you could trade a piece of useless junk on the internet and within a year of swapping it for better and better things you could get cool stuff. Crow decided that he himself was going to start off as that piece of tat, jump from one job to the next; indeed he would trade one lifestyle for a new one, until he was finally a success. Every three months he would have to trade-up for an entirely new life – new job, new girl, new wheels, new pad, new threads – until he reached the top.
The plan of comparing himself to a used item traded over the internet was of course marginally flawed, as there is a human factor to all of this which he’d over-looked. Besides, success isn’t just about work. It’s about the car, the clothes, the house, and getting the girl, so changing all of that with every new trade upwards is a lot more difficult than swapping an old stereo in the classifieds. Crow quickly learns what the price of success really is. An education he would never have got if he had gone to college.

D. C. J. Wardle holds post graduate qualifications in development management as well as community water supply engineering. Over the past twelve years he has worked extensively in developing countries in Africa and Asia, managing emergency and development programmes. You can visit D.C.J. Wardle’s website at: www.dcjwardle.co.uk
His latest book is Trading Vincent Crow.