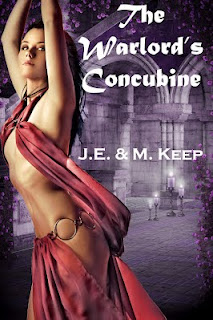 Mirella often wonders what her life would've been like had she been born a princess, rather than the property of one.

When a dark warlord from the north conquers her princess' kingdom, however, he has plans for the dainty young future-queen. It makes the question all the more poignant, because now, more is at stake than just her rough treatment, but love and lust as well.

As an indentured servant and handmaiden to the princess for much of her life, the middle-aged Mirella sees the conquest of the land as an opportunity to elevate herself. Though as she earns the trust of their conquerors, she finds her own nature challenged as well. A life of callous disregard has made her hard, but as she battles the princess' will for the first time and finds new allies and friends, does she have what it takes to win the love and favour of the brutal warlord? Will love and friendship be her downfall? Or will her station in life yet again be her undoing?

Caution: The Warlord's Concubine is a dark fantasy novel that contains explicit scenes, and a twisted romance between a handmaiden and a God.


J.E. and M. Keep have a passion for all things sci fi/fantasy, and a desire to see what characters do when others fade to black. They set out to explore the most sexual, titillating and sometimes terrifying encounters. The plots are contemporary, fantasy, or science fiction, but they all have one thing in common: they’re hot.
From dark and taboo smut to coming-of-ages lust, from twisted love stories to tragic tales of self-destructive needs, they explore the fact that not all ‘Ever Afters’ are happy, and not everyone’s idea of happy is the same.
Come explore the limits of erotica and discover new desires from the smutty minds of J.E. & M. Keep. They can be found on their website at http://www.darkfantasyerotica.com/.

Sex is always a big deal for us in our writing. Some stories have lots, some only have a little. Few have none at all. For the most part, though, relationships are at the heart of our books, and sex comes with that.

People don’t bat their eyes at extreme violence, long, drawn out scenes of fighting, but as soon as sex is introduced it’s treated as a class of its own, and that’s always been weird for us. Not everyone in real life fights and kills, but most of us do have some form of sexual relationship at some point. It’s a natural part of our life, and we want to explore that.

Sex can be a driving force for so much in a novel, and can be a way to show real change for a character that otherwise couldn’t be easily conveyed. It can show callousness, or softness. Power or weakness. Nerves and confidence. It develops a character in new ways, and for me, that’s always a bonus.

Not everything has to happen in the bedroom, but with some characters, like Mirella and the God-King in The Warlord’s Concubine, it is very important.

The theme of worship and submission is pivotal to both characters, and to fade-to-black would eliminate so much that was so important to the story.

One of my favourite books had a fade-to-black sex scene, and though the author tried to make up for the character development that happened during the sex, she just couldn’t possibly recapture who the characters were during the act. She couldn’t adequately explain the unspoken agreements and exploration that the two characters went through, and it almost felt like she was cheated out of that because her publisher wouldn’t allow anything else.

For us, Fantasy and Scifi has always been ahead of the curve on being able to explore our most exciting fantasies and speculations and dreams. Considering how important of a role sex plays in all of our lives, I’d love for more authors to be able to explore it with as much curiosity and enthusiasm as they do for exploring new worlds and new species.

Until then, we’ll keep writing what we know and love – SFF romance and erotica!

This was a quick read. I had a few minor issues with it. Some of Mirella's actions seemed a bit random, but otherwise she is a crafty and smart character. She's got some ambition, yet she knows how to be patient. I liked that.

There IS a lot of very graphic sex. So this is definitely not a book for the weak of heart!

I hated the princess. I did. I can't even try to lie. She was whiny and weak and dull as used dishwater! I felt like after a while she would have grown a bit more likeable, but nope. Not happening. She just grew more and more irritating!

This is a quick, sexy, and steamy read!