Blog Tour: That Old Flame of Mine 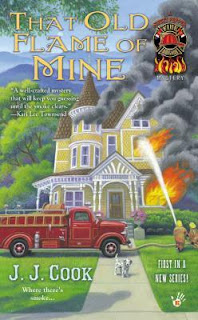 Blurb:
NO MATCH FOR MURDERAfter knocking the lights out of her boyfriend when she catches him cheating on her, Chicago fire fighter Stella Griffin hops on her Harley and heads for Sweet Pepper, Tennessee, where she ends up becoming the small town’s fire chief. When her dear friend Tory Lambert dies after her gingerbread-style house is set ablaze, Stella suspects arson and foul play.

As Stella investigates, she gets help from a most unlikely source—the ghost of Eric Gamlyn, Sweet Pepper’s old fire chief. And if that isn’t enough to rattle her, attractive police officer John Trump seems to have taken an interest in her. But Stella’s got to stay focused if she hopes to smoke out a killer before her own life is extinguished.
My Thoughts:

Again I'm finding myself slowly becoming a fan of cozies. I thoroughly enjoyed this one. The start was a bit of a slow burn (no pun intended) but once it got going it was a fun read! Stella is a great character. She's strong, smart, and interesting. I liked her no nonsense way of stepping up and getting things moving. She's the kind of female character that I like to read!

Every second of this book is a delight! I really liked how well each character was written too! The best I think was the ghost, Gamlyn. He's such a nice guy..erm dead guy!

This is the first book in the series and I think it does a great job at setting up the stage for some really fun books!

Email ThisBlogThis!Share to TwitterShare to FacebookShare to Pinterest
Labels: blog tour, cozy mystery book tours, that old flame of mine