The Ferryman and the Flame Teaser WITH A Giveaway! 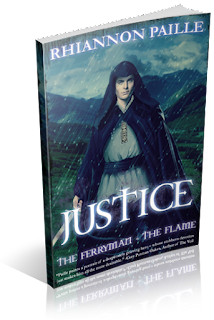 "The truth hurt.
The book hit the floor with a thud and Kemplan leapt out of his large leather chair at the sound.
His pipe slipped from his fingers and fell to the floor as he turned in the direction of the sound,
exploring the corridor. Another book hit the floor and the old librarian jumped. Only he and the
Scryes were allowed to tamper with the books. Even in that capacity the Scryes were only allowed to
touch books they had been told to touch. He straightened his back, pulling his vest taut over his
round chest. He was going to yell at whoever it was when another stack of books hit the floor. He
inhaled sharply and narrowed his eyes as he headed to the nearest row of shelves and peered down
its length. It was empty, but his ears perked up when he heard a faint snarl. He quickly rounded the
shelves and stopped dead in his tracks, heels digging into the wooden planks.
Tor stood surrounded by a pile of books. His back turned, a cloak concealing the shiny gray
scales trailing up and down his humanoid form. He muttered an incantation and held his hands out
over the books.
Kemplan gasped as a spark hit the paper, bursting the pile into flames. “No!”
Tor turned, his gray, scaly face contorted in malice. His hood fell around his shoulders, showing
off shallow horns, spiked ears, and scaly head. Claws for hands clenched at his sides, and in a swift
move he drew Kemplan from the pile of burning books to the wall above the fireplace, catching his
throat in the vice grip of his hand.
“What did you do with it?” Tor seethed.
Kemplan struggled to catch his breath as cold reptilian fingers with talon-like hooks dug into his
thin flesh. A drop of blood oozed from a wound on his neck; he coughed. “The books . . ."
“Forget them. What did you do with the parchment?”
Kemplan’s eyes widened at the mention of it. He had forgotten all about the loose page that had
fallen from the highest shelves, the one he had thrown so carelessly into the fire. He was bound by
the laws of the Great Hall and the law stated he wasn’t allowed to destroy anything unless it was by
Tor’s command. He hadn’t even thought of it when he saw the images of the Ferryman and the
Flame. He thought it was something that had long been destroyed. He stopped kicking and stared
into Tor’s gold, lightning-filled eyes. They were like their own self-contained storms, irises spiking
with jagged black lines every few seconds.
A growl rumbled in Tor’s throat, low and ominous.
“I burned . . . it,” Kemplan said, barely."
from JUSTICE: The Ferryman and The Flame

Email ThisBlogThis!Share to TwitterShare to FacebookShare to Pinterest
Labels: justice, rhiannon paille, the ferryman and the flame, xpresso