Promo: In the Bones 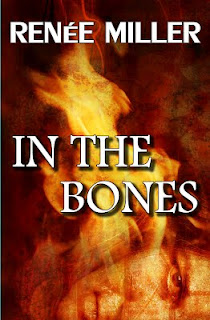 
Welcome to Albertsville: Population 400…and falling.

When Ryan Cassidy claims a house left to him by his estranged grandparents, he becomes tangled in the mystery of a town crushed by a deadly secret spanning generations.

The town's power core, which includes the reeve, his council members, and the local police, smother opposition with deceit, brutality and fear. They will stop at nothing to keep the horror they've committed buried.

A severe winter storm leaves Albertsville snowbound—a trap only the dead can hope to flee—and Ryan becomes a liability that must be silenced at any cost.

The answers to the town’s mystery and its salvation are hidden...In the Bones.

Renee Miller is a freelance writer living in Tweed, Ontario. Small town life is busy, but she’s managed to sandwich a book or two between the demands of housewifery and hiding from the neighbors.
Bitten by the writing bug at the tender age of nine or ten (she can't recall those years as clearly anymore) Renee has forever had a story building in her head. It wasn't until 2009 that she considered turning her passion into a serious endeavor. She has several completed novels she prefers to call "almost published" and many more awaiting their chance to be polished enough for public consumption.
Last year she co-founded On Fiction Writing, a website for writers, created by writers. IN THE BONES is her first published novel.

“I don’t have no intention of being friends with you, Mr. Cassidy. You can save that cocky little grin for another female. One that falls for that sort of thing. I just wanted to say something, so it’s clear and we can go on about our lives without any trouble. You understand what I’m saying, Mr. Cassidy?” She spoke his name as though it tasted foul on her lips.
Well shit.
Audrey kept her face averted, focused on wiping her hands.
Back to the woman Ryan smiled again. “All right. I’m all ears.”
“I know your type and I don’t like it. I don’t like the problems you’re causing already. You think you can come in here and charm everyone with your baby face and that butter-won’t-melt smile, but you’re wrong. What was that bullshit at the meeting? Trouble, that’s what. Some of us have a brain in our head and we remember where you come from. Your mother was a conniving little slut and your father no better than a pedophile. White trash. That’s what you are. Melvin and Rachel used their money to gain respect. Cassidys always did feel they were better than anyone. I don’t care if your great granddaddy helped found this town; none of them were worth shit. Lord knows there was nothing about your parents that’s respectful. Weren’t even married.”
Audrey choked and sputtered. Grabbing her beer she swigged down half the bottle before she set it down. She still didn’t look at Ryan.
He raised an eyebrow at the woman, startled at the outburst. “I’m sorry you feel that way, ma’am. I’m afraid I can’t speak for my father or my grandparents as I didn’t know them and I have to give you the benefit of the doubt. Perhaps they were all jackasses, I don’t know. But I can speak for my mother, and I’ll politely ask that you never let her name pass your lips again. I promise you won’t have to tolerate my cocky smile or charm if you do.”

Email ThisBlogThis!Share to TwitterShare to FacebookShare to Pinterest
Labels: beneath the silver lining, in the bones, promo, rabt