BLURB:
"Liquid fire poured into me, filling me with the intimate sense of him as he leaned in to claim my lips
with his own. I reached for him, needing him closer, but my arms couldn't close the distance between
us, which grew wider with each hitched breath. So close to finally feeling something real, something
carnal and deep, I cried out in frustration, dropping my hands as he disappeared. My cries deepened
into a frenzy of panic and my eyes flew open. I clutched my blanket and stilled myself to calm my
racing heart.

Rose Wintersong didn't have an ordinary upbringing. Raised in what most would call a hippy
commune, but what is actually a powerful coven of witches, she never questions the life fate chose for her.

Until she meets Derek O'Conner.

Derek challenges everything Rose believes and forces her to see the secrets hidden beneath the
whitewashed walls of her idyllic country life.

Rose knows she should walk away, that the sexy martial arts instructor is bad news bred to create
discord in her tight community… but the animal magnetism between them is impossible to fight.

Caught between the passion of first love, and the steady beat of the life she's always known, Rose
must choose between the innocence of her youth or the pleasures of womanhood—but lost innocence
comes at a price, and Rose harbors a dark secret that could destroy everyone she loves—including
Derek.

Kimberly Kinrade was born with ink in her veins and magic in her heart. She writes fantasy and
paranormal stories for all ages and still believes in magic worlds. Check out her YA paranormal series
The Forbidden Trilogy, her lower grade fantasy series The Three Lost Kids, and watch for her New Adult
romance and fantasy books coming in 2013 including The Seduced Saga, Sunrise and Nightfall, Death by

Destiny and The Fallen Trilogy and her next YA fantasy adventure, The Reluctant Familiar. You can find
her books on Amazon, B&N and Goodreads among other fine retailers.

When she's not writing, she runs Daring Books Design & Marketing with her husband, Dmytry Karpov,
where they help authors with all manner of marketing, editing, and design needs until such a time that
their brilliant children take over the business for them.

Available to purchase at


My Thoughts:
I really liked this. It read very quickly, but was definitely a meaty and well written book! I kind of felt a bit like the names of some of the characters were a bit much, but that's just a silly little irk of mine. Nothing against the book at all really. I loved the chemistry that Rose and Derek had. Their story is pretty spicy and interesting. I usually feel like "insta love" equal ridiculous but sometimes it can be a sweet thing, just like in this book.

Rose's  special ability makes her a very unique character. You want her life to be good because she's a good person, but unfortunately her circumstances don't seem to want her to have that. I thought her story line was the most interesting. Just the fact that her touch can suck the life out of you is ..well wow. So many things can happen!

This is a solid start to a series, it definitely reads like a "part one," but whereas most first installments feel flat this one is not. I definitely will read the next one! 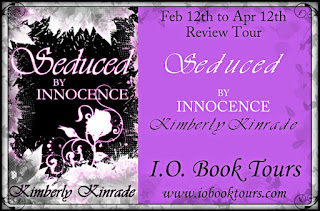