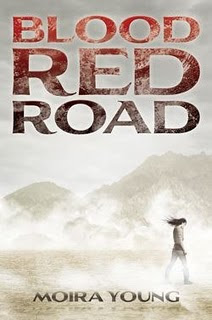 Saba has spent her whole life in Silverlake, a dried-up wasteland ravaged by constant sandstorms. The Wrecker civilization has long been destroyed, leaving only landfills for Saba and her family to scavenge from. That's fine by her, as long as her beloved twin brother Lugh is around. But when a monster sandstorm arrives, along with four cloaked horsemen, Saba's world is shattered. Lugh is captured, and Saba embarks on an epic quest to get him back.

Suddenly thrown into the lawless, ugly reality of the world outside of desolate Silverlake, Saba is lost without Lugh to guide her. So perhaps the most surprising thing of all is what Saba learns about herself: she's a fierce fighter, an unbeatable survivor, and a cunning opponent. And she has the power to take down a corrupt society from the inside. Teamed up with a handsome daredevil named Jack and a gang of girl revolutionaries called the Free Hawks, Saba stages a showdown that will change the course of her own civilization.

I first thought I wouldn't be able to get into this book. The way it's written is based on how she talks. When I opened it up and saw sentences like .." We ain't had a drop of rain fer near six months now," (taken from page 7 of my ARC) I was hoping it was a one time deal. Nope, this is how the book is written. Saba is illiterate and seemingly uneducated, so the way this book is written makes sense. Once you get into the story, which shouldn't take too long, you forget the irksome writing.

I felt as if Saba was in front of me telling me her story. This is an awesome story. There are all kinds of neat little elements that definitely make you wanna keep reading. I devoured this in two days. It's got a bit of everything in it that makes me a happy person. There's the dystopian elements, the struggle for survival, and a little bit of a love story all meshed into one! It works too!