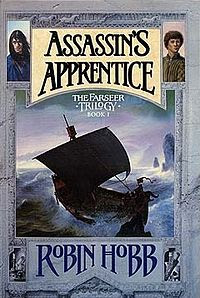 About the Book:
The bastard sons of kings play a noble role in fantasy: not only were King Arthur and Modred by-blows, but it is often suggested that Merlin himself came to power from the "wrong side of the bed." While Hobb's offering has a few too many illegitimate heirs backstabbing around, this is still a delightful take on the powers and politics behind the throne. Fitz, who is often called the "Boy" or the "Bastard," was begotten by good Prince Chivalry upon some "peasant" woman. At age six, he is given over to the safekeeping of the prince's man, Burrich. Fitz's impolitic existence causes the prince to abdicate his claim to the throne, and he and his wife leave the court, and the boy, behind. Fitz has inherited the "Skill," a mind-bending talent, and also has the ability to meld his thoughts with those of nonhuman creatures and to mentally "repel" physical advances. When Fitz finally comes to King Shrewd's attention, he is given over to the Royal Assassin's tutelage and trained to carry out the king's devious plans. The novel's conceit-that it offers Fitz's memoirs from childhood through adolescence-allows for several sequels.

Wow! Robin Hobb where have you been all my life? Seriously! I loved this book almost from the start! Fitz is such an interesting character and he's someone that you wanna help and become friends with! I even loved the tiny characters! They are written so well you kind of forget they are minor characters!

The story is awesome! There's back history but it's not heavy handed. You learn about the world as you go and it's very intriguing. The plot is majorly intricate but not at all contrived feeling. It's just so smoothly written and developed that it feels like you are there. Everything happens for a reason and that's what I loved about this book!

I have the next book in the series and I will be reading and reviewing it here soon! I can't wait to find out what happens to Fitz next! He's one of my new favorite characters EVER! :)