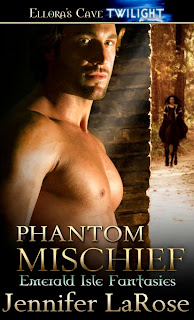 Niall mourns the death of his beloved Abigail until he sees Shanna. He falls in love with the
gorgeous American but fears his heart will surely be broken again. They can’t stay together,
not in the manner Shanna needs. But when a determined, dark apparition begins stalking
her, Niall realizes it may be the key to their destiny.

Inside scoop: In one red-hot scene, Niall introduces Shanna to the joys of spanking.

Authors Bio:
Jennifer LaRose resides in Ohio, where she was born and raised. She’s surrounded by loving family and friends whose charm and wit never cease to amaze her. They serve as the backbone, encouragement and inspiration to her writing career. Jennifer works full-time in the healthcare field, plays the non-stop domestic role and writes during every available moment in between. She is multi-published, writes in other genres and loves to receive mail from her readers.

I’m out of here. Today.
Shanna grabbed her purse, threw a lightweight sweater over her shoulders, yanked Derek’s suitcase off the floor then left the room. She’d barely slept a wink all night. And spending the evening crouched in a corner, starving, scared half to death because she didn’t understand what was happening and wrapped in a blanket with her head covered wasn’t her idea of comfort. Sure, she enjoyed every moment of the sexual encounters, but realistically, that type of thing only happened on TV. Why had it happened to her?


She’d tried calling Adrienne at 2:00 a.m. to talk through the incidents but she couldn’t obtain any reception from inside the room. No cell phone, no ability to connect to the complimentary Wi-Fi, not even the landline worked, which had kicked the idea of room service to the curb. Talk about feeling entrapped and stranded.

When younger, she and Adrienne believed their house was haunted. Well, it was haunted. Shanna saw a ghost of an old woman to prove it. She’d even taken her claim to a psychic who said Shanna had the talent to communicate with spirits. Why in the world would she want to do that? A talent? Really? It sounded more like an affliction.

Every noise she and Adrienne heard in the closets and every footstep thumping along the hardwood floor between their rooms, they’d attested to the predictable ghost. They’d even gone as far as setting tape recorders in their bedrooms to capture voices. They’d never caught any but the thrill was in trying. Then one morning before Shanna crawled out of bed to dress for school, the edge of her blanket lifted and a gnarled hand, like a demon claw, shot beneath the covers and grabbed her thigh. Terrified, she ran from the room screaming. Even though she’d showed her mom the scratches left on her leg, Mom tried convincing Shanna she’d done it to herself. That was the last time she’d mentioned ghosts and demons to her mother and she never again set a tape recorder inside her room.

Grandma, on the other hand, believed Shanna’s episode. Shortly after, she’d presented Shanna with the bracelet. Grandma said it would keep her safe because it’d been blessed with the greatest strengths of each zodiac sign. Although Shanna didn’t believe metal trinkets could play such an important role in her life because she felt no different whether it was on or off her wrist, she found comfort in Grandma’s gesture.

What would Adrienne say now if Shanna explained last night’s encounter with the supernatural? If Shanna had any self-respect left by the time she fled this place, she wouldn’t even mention it.

She slid her sunglasses from the top of her head to her nose to conceal the dark circles under her bloodshot eyeballs. Ugh. As if those weren’t bad enough, her entire genital area was swollen and tender.

Swearing on her life, she’d had sex with a huge cock. No, she hadn’t seen it, but she didn’t have to. She knew how a sound screwing felt. And just because she couldn’t see it didn’t mean it hadn’t happened. The fact was, she’d been wide awake. It wasn’t a dream or delirium from lack of nutrition. Nor had she fist-fucked herself. Seriously. To even suggest she’d do something so atrocious. And she knew she’d also been fucked on the bed moments prior to that incident. And she’d tried convincing herself she’d had a wet dream?