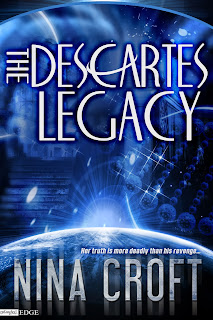 Blurb:
Lucas Grafton has spent the last ten years hunting the Conclave, a secret organization who took everything from him: his wife, his child, his very identity. Now he has a lead—an imminent terrorist attack on London—code-named Descartes.

Born with a genetic illness, Jenna Young has always known she was different. But the unexpected death of her father catapults her into a world of murder and terrorism she never expected. In order to stay alive, she must solve a twenty-five year old mystery—and her only ally a hard bitter man in search or retribution, her only clue the Descartes Highlands, an area on the near side of the moon.

Luke’s need for revenge collides with Jenna’s hunt for the past, and together they must stand against the Conclave. All the while uncovering the truth behind Jenna’s illness, a truth that will make Jenna question her very humanity.

“Jenna, there’s someone to see you.”
Her first thought was the police, and David’s memory flooded over her again, followed swiftly by a dull ache in her chest.
But for some reason, the stranger who stood in the doorway didn’t make her think “police.” He was tall, at least six three, with a lean body beneath black pants and a black shirt open at the throat. His face was pale, his hair short and black.
When he saw she’d noticed him, he stepped into the room and came toward her, moving with the grace of an athlete, each step controlled, giving Jenna the impression of leashed power.
Halting in front of her, he held out his hand. This close, Jenna could see his eyes were a beautiful hazel, green-brown flecked with gold. As she slid her palm against his, a frisson ran through her arm, along her nerves, settling low in her belly. She glanced at him sharply, but if he felt anything, he wasn’t giving it away. She pulled her hand free and edged back.
“How can I help you?” she asked.
He studied her, head tilted to one side. “My name is Luke Grafton. I’m David’s cousin.”
Shock locked her muscles. “I don’t understand. Have you heard—” She broke off as he nodded, his expression somber. “I’m sorry. I didn’t even know David had a cousin.”
“We were close when we were younger, but we’d lost touch over the last few years.” He glanced around the lab, his eyebrows rising as he took in the half-formed skeleton on the table beside her. “Is there somewhere we can talk?”
“Of course.” Visitors were often uncomfortable around her work, though she had the impression very little would bother this man. “We can go to my office.”
She led him out of the lab and along the corridor to her tiny cubicle, leaving the door open behind them. With this man beside her, she realized how minute the space really was. He was big, not only tall, but also broad at the shoulders, and she couldn’t help but be conscious of his closeness. Her body felt twitchy, on edge, and the strangeness of the emotions disconcerted her.
She shook off the feeling as she cleared a box of bones from one of the two chairs. Skirting the desk, she sank into her own seat and indicated the one she had cleared. He sat on the too small chair, his long legs stretched out in front of him, arms folded across his chest, studying her intently, as though he could pierce her mind. Find her secrets.
Almost squirming under the concentrated stare, she picked up a pencil from the desk, twiddled it between her finger and thumb, then put it down again and focused somewhere over his left shoulder. “I’m sorry about David. He was a good friend, but I’m not sure how I can help you.”
“David called me last night.”
Her gaze flashed to his face. “He did?”
“I hadn’t heard from him in a while—I was surprised. He told me he thought he was being followed. He was frightened.”
“Oh.” A tremor of unease skittered down her spine. She frowned as she thought about his words. “Why did he go to you and not the police?”
“I run a security firm, and he asked me to investigate something for him. I also provide protection for prominent people.”
“You mean like bodyguards?”
He nodded.
“David wanted you to provide him with a bodyguard?”
“Not exactly. He wanted me to provide you with a bodyguard.”

Authors Bio:
Nina Croft grew up in the north of England. After training as an accountant, she spent four years working as a volunteer in Zambia which left her with a love of the sun and a dislike of 9-5 work. She then spent a number of years mixing travel (whenever possible) with work (whenever necessary) but has now settled down to a life of writing and picking almonds on a remote farm in the mountains of southern Spain.
Anytime, anyplace, anyone…love finds a way.
WEBSITE    FACEBOOK   TWITTER   GOODREADS

Out of the Comfort Zone


If we let it, it becomes very easy and very comfortable to stick with what we know. But that means that maybe we stagnate, stop growing as people. So now and then, it’s good to push ourselves beyond our comfort zones.
I moved around a lot when I was younger, so I never got much of a chance to be comfortable anywhere. Now, I’ve settled down on my almond farm in the mountains of southern Spain; I’ve just about turned into a hermit, and maybe got a little too comfortable. I tend to get my excitement vicariously these days through reading and writing, but even with these acticities, it’s possible to push your comfort zones.
While I’ve written across many sub-genres: paranormal, science fiction, contemporary, and even mixed science fiction with paranormal, all my books tend to have a strong element of romance at their center. So maybe for me, romance is my writing comfort zone. But when I set out to write The Descartes Legacy, the intention was that it wouldn’t be a romance.
Here’s how that came about, and how my other half did his best to prod me out of my comfort zone.
I was sitting at breakfast one day, when he looked up from his paper (I think he was reading the Sunday Times bestseller list) and asked me—why don’t you write a good book?
He survived (it’s pure coincidence that he hasn’t been seen since—honest) and when the knives and forks stopped flying, we got into a discussion about what exactly he considered a ‘good’ book to be. It turns out…no romance, no vampires, no werewolves, and no science fiction (all my favorite ‘comfort’ things!) Anyway, I like a challenge, and I as I mentioned—I’ve been getting way too comfortable lately, so I said I’d have a go.
I decided I wanted to write a thriller—I was thinking along the lines of a ‘24’ type scenario, not the time limit, but the imminent terrorist threat type story, as I love to read and watch those. 24 is probably my favorite TV shows—I love the tortured, Jack Bauer, type hero. A man who is essentially good, but is driven to do things that are maybe outside his ethical code…because someone has to do them.
My hero, Luke Grafton, is such a man. For ten years, he’s been searching for the shadowy organization responsible for the death of his wife and baby. Now he has learned that they are about to embark on a terrorist attack that could kill millions and change the world forever. Luke will do anything to stop the attack. Or so he believes, until he meets Jenna.
And this is where my plan for my husbands ‘good’ book came a little unstuck.
The problem is—I love romance, and I can’t have a man and a woman who are so obviously perfect for each other (and I mean that in the romance writing sense that there were so many reasons these two shouldn’t fall in love… so much potential conflict) and not hunt for ways and means to bring them together. So the ‘no romance’ slid a little (okay, maybe more than a little)
And then there was Jenna herself. Jenna was a mystery. She’s somehow tied in to Luke’s shadowy organization but neither she nor Luke can work out how. How does an imminent terrorist threat tie in with her birth over twenty-five years ago? It turns out… Well, that would spoil the story, but I will admit that the ‘no science-fiction’ fell by the wayside as well (but not as far as the romance, just a little hint.)
So I told my other half that I’d tried and that there are definitely no vampires or werewolves in the book (however much I’d wanted to throw a couple in there—I love mixing up genres.)
So that was my little stroll beyond my comfort zone. It didn’t quite work out, but I had great fun trying, and The Descartes Legacy has turned out one of my favorite books.
So when was the last time you got out of your comfort zone, and what did you do? Let me know for a chance to enter the blog tour giveaway and maybe win a $25 gift card. 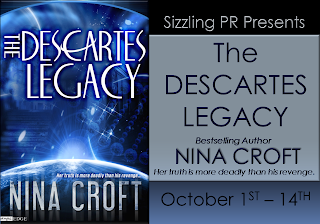