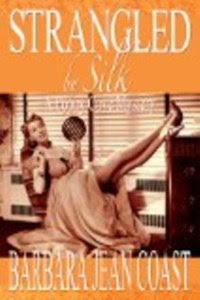 Synopsis
Darlings! Here’s the scoop on my latest mystery STRANGLED BY SILK. It’s all about Daphne and Margot––two independent young California women in 1957––own their own dress shop called Poppy Cove.

When one of their top clients––Constance Stearns-Montgomery––is strangled to death with her own silk scarf at the opening ceremonies for her new girls’ academy, Daphne and Margot are shocked. They can’t believe that such a horrid crime could take place in their sleepy little oceanside village of Santa Lucia. Worse, they’ve lost one of their best clients. The two women quickly become embroiled in solving the crime. After all, if anyone can track down the killer, it should be them. Margot’s long-time beau is the town’s top cop, and Daphne is a master at using her flirtatious wiles to extract information from unsuspecting men.

Of course, neither girl will let their snooping get in the way of more urgent tasks such as choosing new textiles and accessories for Poppy Cove or planning their fall fashion show or––most important––selecting the appropriate ensemble to wear for each and every occasion. But these two fashion detectives are on the case, and the murderer––and the poorly attired––had better watch out!

Barbara Jean Coast is the pen name of authors Andrea Taylor and Heather Shkuratoff, both of whom reside in Kelowna, BC, Canada. Barbara Jean, however, is a resident of Santa Lucia, California (eerily similar to Santa Barbara), where she enjoys long lunches, cocktail parties, fancy dinner dates with attractive and attentive gentlemen. Her interests include Alfred Hitchcock movies, reading Carolyn Keene, music by popular musicians, such Frank Sinatra and Tony Bennett, shopping for new dresses, attending society events and always looking fabulous in kitten heels. STRANGLED BY SILK is her first novel in the Poppy Cove Mystery Series.


This wasn't a ground breaking mystery, BUT it was a very well written and fun one! I liked Daphne and Margot! They had a great chemistry! The writing was pretty strong too! The mood of the 50's was captured and of course the fashion was described to a T. If anything the writer might have gone overboard on that, but considering what the characters do for a living I think it balances out.

The mystery, like I said, wasn't groundbreaking but it was still very fun to read. The ladies are quick to put their head's together and get things done.  The story comes to a quick end, and the mystery is solved. I think the mystery aspect is the least important part of the book, the best part is the interactions between Daphne and Margot that make this book shine!

All in all this was a fun read. I liked it!