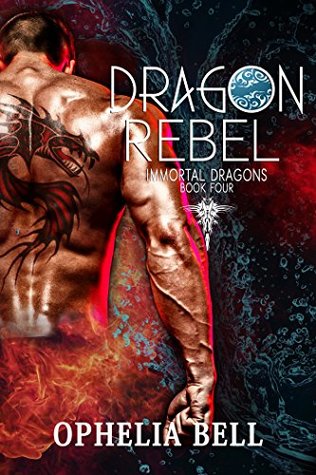 
If Assana looked up the word “nymphomaniac” in the dictionary, she might expect to find her own image in place of the definition, especially after meeting the immortal red dragon, Gavra. The timing couldn’t be worse for her to discover the mate that Fate intended—the one she’d be willing to let go of her tightly bound hold on her deepest sexual desires for—the one who literally drives her mad with lust. Now that she needs her sanity more than anything to regain control of her race’s home from her own insane mother, she’s faced with the inconvenient desire to lose control and be that primal nymph she keeps locked inside.


Thank Gaia for Silas. The handsome young ursa male is blessed with magic that can calm the lust-filled madness threatening to consume Assana’s mind. She needs him more than ever now that she has no choice but to spend her days in close proximity to the dragon she desires more than anything… yet doesn’t dare touch lest she give in to that ancient, primal need all nymphaea are born with.


For red dragon Gavra, he can only put off having the beautiful nymph maiden for so long, or the ursa male who Fate has promised him. Once Assana’s crazy mother is out of the way, nothing will stop Gavra from claiming and marking them both as his.

Gavra spun around at the sound of the deep, familiar voice that had so recently been speaking inside his head. His brother stood in the center of his room, his arms crossed and a grim smile on his face.
“Aodh,” he said, unable to mask the utter relief he felt at seeing his white-haired brother whole and in the flesh. He pulled the other man into a fierce embrace that was returned in kind, releasing him when Aodh stiffened.

Gavra looked back in the direction of his brother’s gaze and saw Vrishti standing with an excited look about to breach the barrier into his room.

“She wants to see you,” Gavra said. “Surely you won’t deny her a proper greeting.”

Aodh shook his head. “A proper greeting? She’s not ready, brother. Perhaps it’s fine for you and Silas to tangle before you’ve marked him. We can’t risk her reputation while she’s still learning about her kind.” Turning to Vrishti, he said, “After we’ve settled these issues with the Haven, love. I promise you no prison can keep me from you then.”

Vrishti dropped the hand she had been about to push past the barrier and nodded. Her eyes grew glassy and she took a shaky breath. “I’ll be ready for you, I promise,” she said. “I can’t stand to see you trapped like this… I’m sorry. Be safe. Keep him safe…” She directed the last comment to Gavra and Assana, who both nodded.

Gavra gave Assana a perplexed look. “Why didn’t you drift into the room with him?”

Assana carefully avoided his gaze as she hugged Vrishti farewell and watched the other female go, then she glanced at Silas, a look of pure gratitude on her lovely face. The big ursa male moved closer to her, wrapped an arm around her and held her. Gavra’s chest felt leaden at the way the pair looked at each other – like they belonged in each other’s arms. They were kindred elements, both Gaia’s children, and made sense together more than Gavra himself made sense with either of them. The way he and Silas crashed together with such fiery, explosive force felt right to him, but it was not easy, or pretty – it was passionate, volatile, and destructive.

“He calms my primal spirit,” Assana said softly. “I’m afraid to come closer to you because you only make the madness claw at my mind more. I allowed Aodh to take control of his own drift once he promised to go where I asked. I couldn’t be in the same room with you for fear of losing control. I’m sorry, Gavra… I can’t let myself lose control, not when my entire home, my family’s well being is at stake. Please understand.”

He wanted to roar in protest, to breathe flames at the barrier and pull her inside, show her how right it would be to let go and be her true self – the wild nymph he sensed glimmers of beneath the surface whenever their eyes met. The insatiable creature who haunted his dreams, responding to his heat so perfectly.

Aodh’s hand rested on his shoulder and gave him a comforting squeeze.

Gavra swallowed the molten lump in his throat and nodded. Finding his voice, he said, “I want you wild, Assana. The first time I’m inside you, you can be damn sure control will be the last thing on anyone’s minds.”

Silas tightened his hold on Assana protectively, though his aura flared bright red in response to Gavra’s promise. She closed her eyes and took a long, slow breath as though fortifying herself before opening her eyes.

Her hypnotic, whirlpool gaze met his through the barrier. “I want that, too. To share my primal essence with you both, to taste yours when we’re thrice melded and feel your heat deep inside my mind. To feel you etch your mark on my skin. Gaia save me, I would take that now, but I can’t risk losing myself to that need. There is too much at stake. Please understand… I need Silas to keep my own nymphaea madness in check, but I promise you the first time you’re inside me will be the first time my quim is filled by any male’s seed.”

Gavra groaned at the promise, forcing himself to pull his gaze away from her or else risk burning down the entire Sanctuary to get to her.

“It looks like Silas is going to have his hands full sating us both separately then,” he said, staring heatedly at the big ursa male. “Can you handle that?”

Silas gave him a lazy smile. “I welcome it.”

Author Bio:
Ophelia Bell loves a good bad-boy and especially strong women in her stories. Women who aren't apologetic about enjoying sex and bad boys who don't mind being with a woman who's in charge, at least on the surface, because pretty much anything goes in the bedroom.


Ophelia grew up on a rural farm in North Carolina and now lives in Los Angeles with her own tattooed bad-boy husband and four attention-whoring cats.