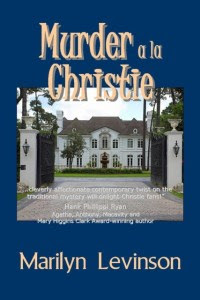 Murder a la Christie
Professor Lexie Driscoll is leading a discussion of Agatha Christie’s novels at the first meeting of the Golden Age of Mystery book club, when an old friend is murdered. A free spirit, Lexie finds herself outside her element housesitting in the upscale village of Old Cadfield. As she unravels secret after secret, more members are murdered. Lexie employs Miss Marple’s knowledge of human nature and Hercule Poirot’s cunning to find the killer.

I'm slowly starting to develop a fondness for this genre, and books like this are solidifying that fondness! The premise is simple. A group of friends gather together for a Mystery Book Club meeting, they will focus on Agatha Christie (amongst others.)
While at the first meeting, one friend "threatens" another friend's life. That friend later dies from what appears to be heart problems. Is it a coincidence? Is it murder?

First off, I both liked and was annoyed by Lexie. She is obviously smart and creative, but she is totally and utterly TOO blunt at times. So sorry, but you don't just interrogate someone at a funeral! It's things like this that made me both roll myself and chuckle. These faults make her all the more real! I can totally see someone being THAT nosy and driven to figuring out a mystery like this, that all sense of decency flies out of the window! So yeah, I liked Lexie, but she could have used a friendly shaking..lol

The best thing about this is the pacing. It moved so quickly there wasn't any time to get bored, or lose focus. Neither of those would really be an issue, since the PLOT keeps you wanting to read until you've figured out who the heck done it!

About The Author
Marilyn Levinson, a former Spanish teacher, writes mysteries, romance, and books for children and young adults.

Her romantic suspense, DANGEROUS RELATIONS, is a love story entwined with an intriguing mystery. GIVING UP THE GHOST is an entertaining ghost mystery. A new edition of A MURDERER AMONG US, which won a Best Indie award from Suspense Magazine in 2011, and its sequel, MURDER IN THE AIR, are out with Untreed Reads this winter. A ghost, a mansion, and a feral Maine Coon cat feature in Marilyn’s most recent YA, GETTING BACK TO NORMAL. Three of her popular out-of-print children’s books, AND DON’T BRING JEREMY, NO BOYS ALLOWED, and RUFUS AND MAGIC RUN AMOK are now available as ebooks.

Marilyn is co-founder and past-president of the Long Island chapter of Sisters in Crime. She lives on Long Island.

Please comment below with a reason why you think you'd enjoy this book! *Easy peasy*
at March 19, 2014