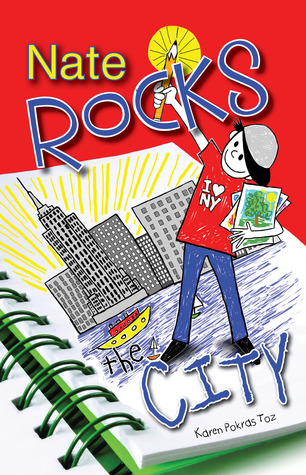 Hey New York! Are you ready for Nate Rocks?

Fifth grader Nathan Rockledge has been counting down the days—and meals—until his class trip to New York City. Now that the big event is finally here, he can barely stand the excitement. After all, isn’t this what being a fifth grader is all about? Oh sure, his Mom is one of the chaperones, his annoying sister Abby is tagging along, and that know-it-all classmate, Lisa, will be there as well. However, none of that matters. Not when he’ll be with his best friends, Tommy and Sam.

While seeing the sights, his teacher wants his class to take notes, but Nathan has other ideas. With paper and pencil in hand, Nathan prefers to doodle, transforming himself into Nate Rocks, boy hero. Amid ninja pigeons to fend off, aliens to attack, and the baseball game of the century to save, will Nate Rocks be able to save the day one more time?

First things first, my 9 year old LOVES this series. So we were both pretty excited to sign up for this tour. He hasn't been able to read it yet, but he's peeked over my shoulder a few time and informed me of stuff from the other books. This is my first Nate book. With my son being a Nate fan, I feel like I've read them all though through his retelling.

So what did I think? As a 33 year old woman, I thought this book was a fun book. Obviously it's not written for my audience, but I enjoyed it. Nate is a really smart and creative kid. He kind of reminds me of my son a little bit, so I definitely like him! :)

This is a great story for Nate-fans, and a very fun way to end a series.

Karen Pokras Toz writes middle grade and adult contemporary fiction. Her books have won several awards including two Readers’ Favorite Book Awards, the Grand Prize in the Purple Dragonfly Book Awards, as well as placing first for two Global E-Book Awards for Pre-Teen Literature. Karen is a member of the Society of the Children's Book Writers & Illustrators (SCBWI). For children, her books include the Nate Rocks series, Millicent Marie is Not My Name, & Pie and Other Brilliant Ideas. For adult readers, Karen’s books include Chasing Invisible, and her soon to be released, Whispered Wishes series. A native of Connecticut, Karen now lives outside of Philadelphia with her husband and three children. For more information, please visit www.karentoz.com. 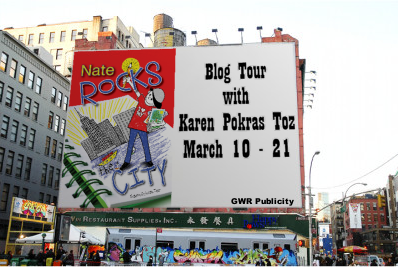 For reviews, interviews, and more fun, click for the full tour schedule.

A GWR Publicity event paid for by the author. YOUR BLOG NAME received no compensation for the post. The giveaway is sponsored by the author who is responsible for the delivery of the prize.
at March 21, 2014