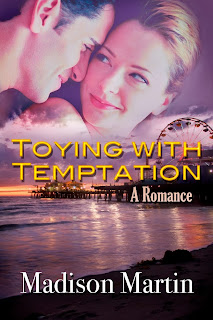 Toying With Temptation
Genre: Romance/Contemporary, Romance/ Adult
Blurb:
Driven, business savvy Hailey Burton, Vice President of Tryton Financial Institute, has been put in charge of running what could be her first ever failure: the company’s Christmas Eve toy drive. Toys and Christmas are beyond Hailey’s expertise, but when she's offered the chance for the promotion she's been waiting for if she succeeds, her competitive spirit kicks into high gear. When every company in Los Angeles turns her down, desperation leads her to Quinn Matheson. Ten years ago, Hailey chose a prosperous career over Quinn, but as she falls for him all over again, she can’t deny that they make a good team in business…and more. This second time around, is she finally ready to make the leap and become his partner in love?

I've been writing for as long as I can remember...I still have my first "book" - scribbled in pencil in a 1-subject notebook in sixth grade. When my mom taught me how to type (on an electric typewriter!) there was no going back. I'm crazy about stories in every form - movies, novels, poems, songs, etc. and love making up my own. I live in the Washington, D.C. area and when I'm not writing I like exploring the sites, going for long walks, and listening to every bit of music I can get my ears on. But most of all I love writing stories...my goal is to make a reader's day a little lighter and brighter!

She couldn’t wait any longer. She unzipped his pants and pulled them down with such force that she almost knocked both of them to the floor. He pulled her down along with him until they landed together in a heap on the carpet.

He gave out a deep laugh.

Years and years of seamless business deals, and somehow she was managing to screw this up. Always with the personal stuff, she was there to make a mess of it. “You’re laughing at my ravaging you?” she asked sheepishly, feeling her cheeks burning. “I know, I know…being with me is kind of like being in a French farce, right?”

“I’m not complaining.” Still seeming to be enjoying himself, he drew her up beside him on the carpet and kissed her.
“You gotta admit that was kind of funny. It’s okay to laugh at yourself sometimes.”
Instead of taking offense, she lightened up. “Help me, then.”
Together they managed to get his pants all the way off.
Pushing him flat onto his back, she settled herself on top and pressed her hands against the delineated muscles of his chest. He was all hers. She raised up onto her knees, and a little jab of pain made her wince.
With a harsh breath, he leaned up, a worried look on his face. “Your knee…”

“No, it’s all right.” She adjusted her astride position, settling comfortably. “There. That’s better.”

Unconvinced, he leaned up and grasped her thigh with one hand. “That scab still looks bad.”

He leaned back, giving in. With a gruff sigh, he said through gritted teeth, “I should have known you’d want to be on top.”

She grinned, shifting her silky underwear along the hard length covered by his boxers. “You used to like it.”

He gritted his teeth and grasped her hips. “Sure. Use and abuse me,” he croaked out.

She examined the look on his face and bit her lower lip. Was she really torturing him? “You don’t sound too happy about it.”

“I’m not going to be able to handle much of your teasing tonight.”

All right, so she admitted she liked teasing him. He was too fun to tease, only because he took it so well. “Are you mad about—?”

In a split second, he had her flat on her back. She laughed as Quinn moved on top of her, pressing his body against hers.

“How about we do it like this?” he asked with a triumphant smile, his dark eyes exploring her face. 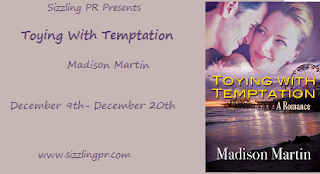