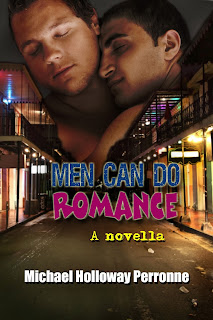 Blurb:
Despite living in free-spirited New Orleans, Elliot finds that his career as an insurance actuary has him constantly weighing the risks of every move he makes in his life. When Troy, his teenage crush, returns home to the Big Easy after a stint with the Marines and unexpectedly announces he’s gay, Elliot must decide if he’s willing to take a chance and find out if men really can do romance.

Buy Links:
Amazon: HERE
Barnes & Noble:HERE
AllRomanceEbooks: HERE
Author Bio:
Michael Holloway Perronne is the author of five novels: "A Time Before Me", "Starstruck: A Hollywood Saga", "Falling Into Me", "A Time Before Us" and "Embrace the Rain” and the novella “Men Can Do Romance.”  His debut novel, "A Time Before Me" won the Bronze Award, Foreword Magazine's 2006 Book of the Year Award in the Gay/Lesbian fiction category.  In addition, Michael recently released his first travel guide, "The Quickie Gay Guide to Cape Town, South Africa." Michael was born and raised in Mississippi.  He received a BA in Film from the University of Southern Mississippi and a MFA in Drama and Communications from the University of New Orleans.

What a Decade Can Do
Almost ten years ago, I released my first novel, a gay coming of age romance titled A Time Before Me. At that time, same sex marriage still wasn’t legal in any part of the United States with Massachusetts being the first state to do so in May 2004. The number of out gay celebrities was still small enough that it almost felt like you could name them all if you stopped to think about it. In the world of literature, numerous editors told me that there wouldn’t be enough readers interested in a gay romance whose spiciest scene concluded in a kiss. What a difference ten years can make.
Now sixteen U.S. states and numerous other countries have legalized gay marriage. It feels like almost every television show includes a gay character, and they’re (gasp!) even allowed to have love interests and show affection for each other. The gay romance novel industry has exploded thanks to small publishers and indie authors taking advantage of new publishing platforms including e-books and print-on-demand technology to the point that even mainstream organizations, such as Romance Writers of America, have acknowledged this sub-genre in romance. Most telling of the change of times I believe is that a large percentage of M/M romance writers and readers aren’t even gay.

While I grew up as a gay teen in pre-internet Mississippi in the early 90s, I often felt so alone and isolated to the point that in my mind I might as well have been the only gay person on the planet. There are certainly still many challenges for gay youth growing up today, but it warms my heart to know that at least now these kids have public role models they can look up to and see images of their lives on TV and film not to mention the resources the internet now provides.

As we move towards a new year, I find myself wondering what another decade will bring us. What will be the attitudes towards the gay community by 2024? My wish is that one day there won’t be a need for people to even “come out” but instead for everyone to live in a society that allows them to be open about who they love with no judgment.
I hope everyone has a safe and happy holiday season! 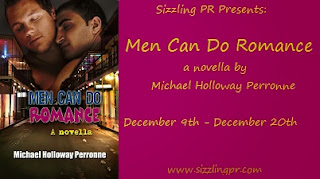