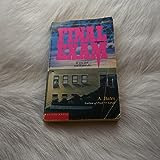 Blurb:
Kelly has always been afraid of final exams. Now she is scared to death. All during finals' week someone has been playing cruel pranks on her. After she wakes up in a burning room, she knows that someone is trying to kill her--and that their final confrontation will be her toughest test ever.

My Thoughts:
Okay I have to admit I got this book solely on the creepy ass cover. I know my picture isn't all that great, but if you look over the door to the school the name of the high school is COLUMBINE! WTF?! This book was written a good 8 or so years before the shooting there, so that is creepy. PLUS the tag line is "if you fail...you'll just die."

So yes, this is a bit of campy, cheesy goodness from the get go. It reminded me of the books I read when I was a young little weirdo just getting her first few tastes of creepy. I used to gobble up all the R. L. Stine novels, and the other scary books that aren't really all that scary but make you feel like your parents just let you rip into the new Stephen King. (Maybe that's just me?)

This isn't a ground breaking, earth shattering book. It's rather formulaic and bland in some places. I cringed at how 90's it was. Who is named Tad? I've been alive for 31 years and have yet to know a single solitary Tad!

The ending was out of nowhere and completely random. The "bad guy" didn't even really have anything to do with the main character at all throughout the whole book, but then WHAM they wants to kill her? That was a bit of nonsense right there!

Basically this was a little trip down memory lane. A cheese fest that was a bit boring and made me really glad that my tastes have matured...somewhat.