Review: I Think I Love You 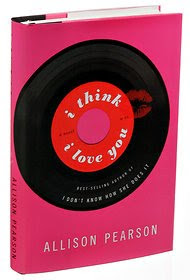 Wales, 1974. Petra and Sharon, two thirteen-year-old girls, are obsessed with David Cassidy. His fan magazine is their Bible, and some days his letters are the only things that keep them going as they struggle through the humiliating daily rituals of adolescence--confronting their bewildering new bodies, fighting with mothers who don’t understand them at all. Together they tackle the Ultimate David Cassidy Quiz, a contest whose winners will be flown to America to meet Cassidy in person.

London, 1998. Petra is pushing forty, on the brink of divorce, and fighting with her own thirteen-year-old daughter when she discovers a dusty letter in her mother’s closet declaring her the winner of the contest she and Sharon had labored over with such hope and determination. More than twenty years later, twenty pounds heavier, bruised by grief and the disappointments of middle age, Petra reunites with Sharon for an all-expenses-paid trip to Las Vegas to meet their teen idol at last, and finds her life utterly transformed.

Funny, moving, full of beautiful observations about the awakenings of both youth and middle age, Allison Pearson’s long-awaited new novel will speak across all generations, to the hearts of anyone who’s ever had a first love.

Who didn't have that GUY/GIRL that you dreamed about when you were a teen? I know I had several celebrities that I just *sighed* and *swooned* over and pinned pictures of them on my walls! Yeah, I did that too. So this was definitely a story that jolted my youthful memories.

I have to admit that I was more intrigued by Petra's storyline than I was for Bill. I mean, it was definitely fun to see how the other side of the story went, but Petra was just more interesting to me. I liked her interactions with her friends. That was DEFINITELY true to how teenage girls act around each other! Later in the story I enjoyed her interactions with her own daughter.

This wasn't my typical read, but it was good. I enjoyed it. This is definitely a quick read, and I do recommend it if you have read and enjoyed Pearson's book, I Don't Know How She Does It?

Email ThisBlogThis!Share to TwitterShare to FacebookShare to Pinterest
Labels: allison pearson, book review, i think i love you