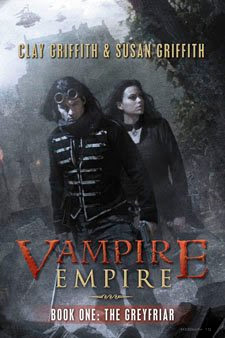 About:
In the year 1870, a horrible plague of vampires swept over the northern regions of the world. Millions of humans were killed outright. Millions more died of disease and famine due to the havoc that followed. Within two years, once-great cities were shrouded by the gray empire of the vampire clans. Human refugees fled south to the tropics because vampires could not tolerate the constant heat there. They brought technology and a feverish drive to reestablish their shattered societies of steam and iron amid the mosques of Alexandria, the torrid quietude of Panama, or the green temples of Malaya.

It is now 2020 and a bloody reckoning is coming.

Princess Adele is heir to the Empire of Equatoria, a remnant of the old tropical British Empire. She is quick with her wit as well as with a sword or gun. She is eager for an adventure before she settles into a life of duty and political marriage to a man she does not know. But her quest turns black when she becomes the target of a merciless vampire clan. Her only protector is the Greyfriar, a mysterious hero who fights the vampires from deep within their territory. Their dangerous relationship plays out against an approaching war to the death between humankind and the vampire clans

Vampire Empire: The Greyfriar is the first book in a trilogy of high adventure and alternate history. Combining rousing pulp action with steampunk style, Vampire Empire brings epic political themes to life within a story of heartbreaking romance, sacrifice, and heroism.

So I'm a newb at Steampunk. I have only really read maybe three novels in this genre (including this one) and lemme tell you, it be good! I love it! So when I saw that this was a mix of steampunk AND vampires OMG I wanted to squeal in a happy way! So I'll just say this. It ...is...awesome!

I was instantly drawn into this story. I do believe that Princess Adele was a character I just loved from the start. She's not a wussy girly girl. She's plucky and all the good things I like to read, in a female character. She's noble but fair. I awwed at her protectiveness over Simon, her brother. I think she is a well drawn and excellently written character. She's not flat. She reacts in believable ways (well in regards to vampires and such.) She's conflicted and interesting.

The Greyfriar, is a mystery. At least at the start. I wrote down my prediction about WHO he would turn out to be, but I was wrong...sorely mistaken actually. I'm glad my prediction failed! (Not going to spoil it!) He is a great character as well. His story is intriguing too. He does bring about a new meaning to the whole, "rebelling against what is expected of you" to a whole new level! I thought the chemistry between Greyfriar and Adele was definitely intense and from the start was crossing my crossables that they got together.

Not only are the main two characters pretty well done, the side characters are also interesting.

I'm looking at you Flay!

I loved that the bad guys were soooo bad and the good guys were good but flawed!

All in all, this is a splendorific start to the series! I cannot wait til the next one is out!
at February 18, 2011