Quick Review: How to Woo a Reluctant Lady 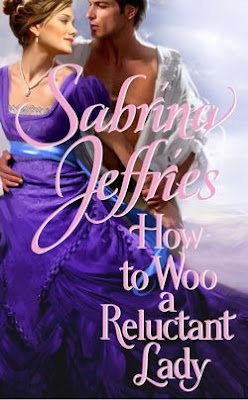 Okay first things first, what up with the cover? Seriously? I'm not sure what is going on here? Who is that model? Lauren Conrad? Anyways, the second thing I wanted to grump about is the title? How to Woo a Reluctant Lady..isn't that called attempted rape? So not a sexy or romantic sounding title.

With that said, the only flaws I found were those two very superficial ones. This is a great romance novel. I am not a HUGE romance fan, but this one didn't make me want to gag or hurl the book across the room..well after I opened it and started to read.

Minerva is definitely not a wallflower, nor is she a weak woman. She writes stories and makes her own living, which is definitely against the grain of her time. I like how she has made plans for her life, and they don't include marriage. She's actually trying to get OUT of marriage, thus the reluctant part of the title.

Giles is a wicked man that has had a speckled past, but is trying to better himself. I liked that he still have that roguish charm, but also a sweet side. I like the back story and was definitely routing for him. I think the two of them have great chemistry.

This was definitely a surprise for me. I liked it very much and for that I tip my hat to Ms. Jeffries for making me want to read more.
at February 14, 2011

Email ThisBlogThis!Share to TwitterShare to FacebookShare to Pinterest
Labels: how to woo a reluctant lady, quick review, sabrina jeffries