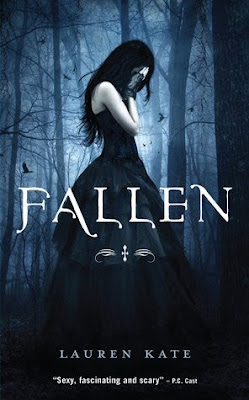 From Goodreads.com:
There’s something achingly familiar about Daniel Grigori.

Mysterious and aloof, he captures Luce Price’s attention from the moment she sees him on her first day at the Sword & Cross boarding school in sultry Savannah, Georgia. He’s the one bright spot in a place where cell phones are forbidden, the other students are all screw-ups, and security cameras watch every move.

Even though Daniel wants nothing to do with Luce–and goes out of his way to make that very clear–she can’t let it go. Drawn to him like a moth to a flame, she has to find out what Daniel is so desperate to keep secret . . . even if it kills her.

My Review:
*sigh* I really really was hoping to enjoy this. I mean it wasn't horrible. I will give it that. I had just hoped that after reading awesome reviews about this I'd simply love it. Alas, I did not. I wasn't as impressed as I would have liked. It was pretty formulaic. Instantly I felt like I had read this book before about a dozen times.

Luce and Daniel are supposedly in love over and over again, but why? There is not back story to explain their past. I hope that this will happen in the future books (I've not read Torment yet so please don't bring out the pitchforks if it is explained.) I especially thought the book felt a bit rushed near the end. There were too many "scooby do" moments where villains and good guys where revealing themselves left and right. Some I were really surprised by and some I saw coming a mile away.

I guess I just got all hyped up with the ..erm..hype that was surrounding this book, but it fell flat for me. Which is a shame.
at February 01, 2011