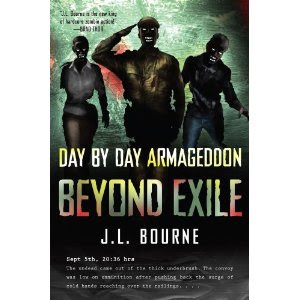 Back Blurb (taken from Amazon.com)
The first book of Day by Day Armageddon took us deep into the mind of a military officer and survivor as he made a New Year's resolution to start keeping a journal. The man kept his resolution and brought to us the fall of humanity, day by day. We see the man transition from the life that you and I live to the prospect of fighting for his very survival against the overwhelming hordes of the dead. We see him bleed, we see him make mistakes, we witness him evolve. The highly anticipated sequel to the bestselling underground cult classic, Day by Day Armageddon begins where the first novel left off.
BEGIN INTERCEPT
Armies of undead have risen up across the U.S. and around the globe;there is no safe haven from the diseased corpses hungering for human flesh. But in the heat of a Texas wasteland, a small band of survivors attempt to counter the millions closing in around them.
INTERCEPT COMPLETE
Day by day, the handwritten journal entries of one man caught in a worldwide cataclysm capture the desperation--and the will to survive--as he joins forces with a handful of refugees to battle soulless enemies both human and inhuman from inside an abandoned strategic missile facility.

But in the world of the undead, is mere survival enough?
(edited by author)

My Review:
Dear sweet baby Jesus this was an awesome book! I finished it yesterday and had nightmares last night. Not because the book was bad but because it was SO good! The journal style gives it the feeling that you're living this with the main character! You feel the constant struggle for survival! The zombies are right there breathing (or not breathing actually, but you get the point!) down your neck!

There were tons of OMG!WTF! moments, like the creepy foggy bridge scene! Agh! That was tense! And a few others that would probably be considered spoilers, but you'll know which I'm talking about when you read this book, because this is one of those that you HAVE TO read! Seriously, pick up the first one and then read it through to the end of the second one! Good stuff man!

The ending was a bit of a surprise for me, but I'm curious to see what Mr. Bourne has in store for us in the next installment. I'm sure he has something up his sleeve!