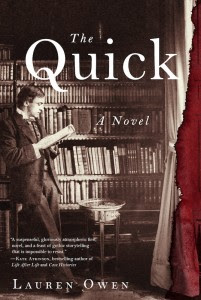 An astonishing debut, a novel of epic scope and suspense that conjures up all the magic and menace of Victorian London.

London, 1892: James Norbury, a shy would-be poet newly down from Oxford, finds lodging with a charming young aristocrat. Through this new friendship, he is introduced to the drawing-rooms of high society, and finds love in an unexpected quarter. Then, suddenly, he vanishes without a trace. Unnerved, his sister, Charlotte, sets out from their crumbling country estate determined to find him. In the sinister, labyrinthine city that greets her, she uncovers a secret world at the margins populated by unforgettable characters: a female rope walker turned vigilante, a street urchin with a deadly secret, and the chilling “Doctor Knife.” But the answer to her brother’s disappearance ultimately lies within the doors of one of the country’s preeminent and mysterious institutions: The Aegolius Club, whose members include the most ambitious, and most dangerous, men in England.

LAUREN OWEN studied English Literature at St. Hilda’s College, Oxford, before completing an MA in Creative Writing at the University of East Anglia, where she received the 2009 Curtis Brown prize for the best fiction dissertation. The Quick is her first novel. She lives in Durham, England.

This is quite a hefty book, and a little intimidating. The length of the book means you can't just pick it up and finish it quickly. It's a book that should be taken slowly and savored. The writing itself is wonderfully done. The pace is just right, however I do think that if given a few edits (maybe cutting the page count down) it would have greatly improved a few spots.

The important bits are well done though! The story flowed quite nicely. The characters were definitely well developed and kept my attention throughout the story. I loved the twist and how it was done. I did NOT expect that, so it was a very nice surprise. I won't spoil, but the book takes a turn that will make your jaw drop.