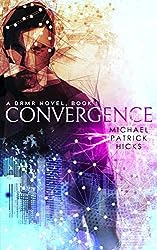 Jonah Everitt is a killer, a DRMR addict, and a memory thief.

After being hired to kill a ranking officer of the Pacific Rim Coalition and download his memories, Everitt finds himself caught in the crosshairs of a terror cell, a rogue military squadron, and a Chinese gangster named Alice Xie. Xie is a profiteer of street drugs, primarily DRMR, a powerful narcotic made from the memories of the dead. With his daughter, Mesa, missing in post-war Los Angeles, Everitt is forced into an uneasy alliance with Alice to find her.

Mesa's abduction is wrapped up in the secrets of a brutal murder during the war's early days, a murder that Alice Xie wants revenged. In order to find her, Jonah will have to sift through the memories of dead men that could destroy what little he has left.

In a city where peace is tenuous and loyalties are ever shifting, the past and the present are about to converge

Really this is a hard book to describe. Not because it's a bad one, but because there is SO much going on and so many things that I really really liked about it so keeping this review at a reasonable length would be rough!

I have to admit that I was not really expecting to enjoy this quite as much as I did. Nothing personal Mr. Hicks, I just don't always get blown away by sci-fi type books. There's really not much that can be new and fresh in this genre, it's more about how you USE the ideas that matters. So to seriously have my jaw drop open a few times is saying quite a lot!

Convergence takes a few ideas from various other genres and formats (movies, games came to mind immediately) and runs wild with them. From the get-go, you are flung into this new world that's not at all pretty. You know that the "good guys" may not always be obvious. So every person that appears is looked upon with suspicion and that kept me on the edge of my seat the WHOLE friggen time!

The writing is tight. The world building is incredible, and the story itself is pretty compelling! I am so glad that I punched my gut instinct in the face, and agreed to read this book! A+ Sir! Count me as a fan!