TLC Tours: The Queen of the Tearling 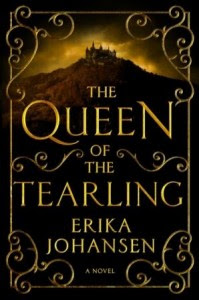 Magic, adventure, mystery, and romance combine in this epic debut in which a young princess must reclaim her dead mother’s throne, learn to be a ruler—and defeat the Red Queen, a powerful and malevolent sorceress determined to destroy her.

On her nineteenth birthday, Princess Kelsea Raleigh Glynn, raised in exile, sets out on a perilous journey back to the castle of her birth to ascend her rightful throne. Plain and serious, a girl who loves books and learning, Kelsea bears little resemblance to her mother, the vain and frivolous Queen Elyssa. But though she may be inexperienced and sheltered, Kelsea is not defenseless: Around her neck hangs the Tearling sapphire, a jewel of immense magical power; and accompanying her is the Queen’s Guard, a cadre of brave knights led by the enigmatic and dedicated Lazarus. Kelsea will need them all to survive a cabal of enemies who will use every weapon—from crimson-caped assassins to the darkest blood magic—to prevent her from wearing the crown.

Despite her royal blood, Kelsea feels like nothing so much as an insecure girl, a child called upon to lead a people and a kingdom about which she knows almost nothing. But what she discovers in the capital will change everything, confronting her with horrors she never imagined. An act of singular daring will throw Kelsea’s kingdom into tumult, unleashing the vengeance of the tyrannical ruler of neighboring Mortmesne: the Red Queen, a sorceress possessed of the darkest magic. Now Kelsea will begin to discover whom among the servants, aristocracy, and her own guard she can trust.

But the quest to save her kingdom and meet her destiny has only just begun—a wondrous journey of self-discovery and a trial by fire that will make her a legend . . . if she can survive.

This book was enchanting and captivating from the start. I loved it! I cannot express how much this book rocked my socks off! I stayed up well past my bedtime reading, which in my old age is saying a LOT! (I love my sleep something fierce!)

Kelsea starts off as a normal girl with a unique situation..nothing super special about her in particular. She has quite a family history, but what is that history? We know what she is intended to do, but we don't really know yet HOW she will do it. She is head strong and smart. She's been brought up by birth to become a future Queen, but what happens when she gets there? What brought her to this point? So many questions!

The story progresses very swiftly as Kelsea becomes Queen and learns what she must do to rule the kingdom of Tear. She is surrounded by close allies, but also enemies. Who should she trust and who should she stay away from? This sense of dread kept me on my toes. I felts myself trusting and distrusting certain characters and wishing I could tell Kelsea to be careful of them!

My only ..not really complaint but maybe irk.. At first I wasn't sure what time this story took place in. Most fantasy novels are set in a medieval kind of time frame, but this one was set in the future. After I realized this, I was VERY curious to know about the "Pre-Crossing" history. How did they end up living how they did? I want to know more! I know there is an over abundance of sequels but I want THIS one really very badly! (So please MS. Johansen make this happen?)

Anyways, this has already been optioned for a movie and I for one am super excited to hear this! The book should definitely translate well into a movie!

Erika Johansen grew up and lives in the San Francisco Bay Area. She went to Swarthmore College, earned an MFA from the Iowa Writers’ Workshop, and eventually became an attorney, but she never stopped writing.