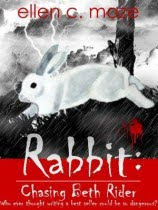 That is until Jack Dawn, a real-life vampire, vows to kill her because of the vile redemptive message her book is bringing his people. The ancient race of bloodthirsty immortals to which Jack belongs, known as the Rakum, have spread evil among mankind since the Beginning. But Jack alone recognizes the novel’s destructive potential and she must die.

Jack’s proselyte Michael Stone was brought up from his youth to be strong, sensible and brutal. But at one hundred and thirty, Michael is old enough to appreciate his quiet and ordered life. When he stumbles upon the beautiful and apparently innocent Beth Rider, he is puzzled by his Elder’s unreasonable actions against her. Instantly smitten, Michael takes it upon himself to protect her from the limitless lust of his brethren.

Facing the most terrifying trial of her life against creatures known only in fables, one simple woman will threaten the existence of a powerful and accursed people. In the climactic final battle, it is a race to the death, or if Beth has her way, a race to the life—of every Rakum who makes the choice.

This is certainly a fresh new approach to the vampire genre. I definitely enjoyed that about it! It is very well written and the characters are interesting and real. I wasn't as wowed by it as I wished I could have been, but that doesn't mean this wasn't a good book. I do think this book will delight fans of the vampire genre both old and young alike! I'd give it a solid 3.5/5 rating!