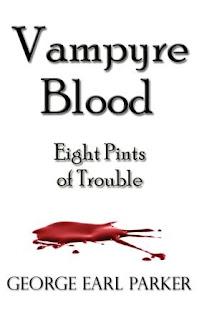 When young New Orleans lawyer Bradley Harrington Chester III lies dying in the street after being hit by a speeding car, it seems that his life is over. But as his spirit drifts away toward a distant light, he is approached by an exotic fellow who claims to be both the Count Dracula of legend, and a violin player for The Techno Zombies, a Goth rock band on a world tour.

The Count explains that with the aid of a wizard he has abandoned his dark legacy, and now finds himself in need of a legal representative. So he offers Brad a deal–Brad can shuffle off into the light wherever it may lead, or he can become his lawyer, and be revived by a transfusion of Vampyre Blood.

The very last thing the young lawyer remembers before dying was his wife asking for a divorce, and prior to that he remembered being handed the prosecution of a mafia kingpin on his first day at the district attorney’s office. He wondered why the DA was so friendly to him, and so nasty to his star attorney Richard Bleddon, and he wondered why Bleddon had arranged a champagne supper at a fancy restaurant for him and his wife. After which, a speedy midget had snatched his wife’s purse and led him out into the street to die.

Impatiently, the Count presses for an answer to his offer, and after being assured that he will not become a Vampyre himself, Brad accepts, hoping to return and make sense of the madness that brought him to the brink of death. Populated by lovable rogues, scheming lawyers, and thieving gypsies, Vampyre Blood-Eight-Pints of Trouble is an insane romp through New Orleans, illustrating the intensity of our human desire to get what we want at any cost, and the strange places that desire can lead to.

I wasn't sure what to expect from this book. I thought the concept was interesting and fresh, but was taken back by the humor I got. Not entirely in a bad way. I enjoyed the book as a humorish tale that shows the way people act. This isn't going to be for everyone, but I had fun reading it. I'll give it a 3/5 rating.