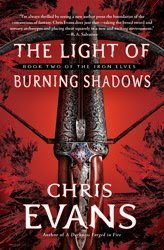 "They might be doomed, damned, and buggered for all eternity, but that didn't mean they couldn't sparkle like a diamond in the sun and grin like a skull in the moonlight on their way to oblivion."

Musket and cannon, bow and arrow, and magic and diplomacy vie for supremacy once again in this second epic fantasy adventure from acclaimed author Chris Evans. As the human-dominated Calahrian Empire struggles to maintain its hold on power in the face of armed rebellion from within, the Iron Elves' perilous quest to defeat the power-hungry elf witch, the Shadow Monarch, takes on greater urgency.

The Iron Elves, shunned by their own people for bearing the mark of the Shadow Monarch, and desperately wanting to forever erase this shame, became legendary for their prowess on the battlefield as the Calahrian Imperial Army's elite shock troops. But when their commanding officer, Konowa Swift Dragon, murdered the Viceroy of Elfkyna, he was exiled, and these brave elves were banished to a remote desert outpost, doomed and leaderless, their honor in tatters.

Recalled to duty to reform his regiment from the dregs of the Imperial Army, Konowa thwarted the plans of the Shadow Monarch at the Battle of Luuguth Jor -- ensuring that the fabled Red Star, a source of great natural energy, did not fall into Her hands. Now Konowa must cross storm-tossed seas to seek out the lost elves and the prophesied return of another Star somewhere in a desert wasteland roiling with mysterious power, infernos of swirling magic, and legends brought back to life in new and terrible ways. And the fate of every living creature will come to depend on a small band of ragged and desperate soldiers, whose very loyalty to the Empire they have sworn to serve is no longer certain. When death is but a temporary condition, a terrifying question arises: who is the true ally -- and fearsome enemy -- in a growing conflict that threatens all?

The Light of Burning Shadows picks up where the first book, A Darkness Forged in Fire, left us. I got the wonderful opportunity to get my hands on BOTH books and let me tell you, this was a treat! Chris Evans has now become one of my favorites! The character's were well drawn and the plot was well crafted. I laughed out loud at the antics of Yimt, the loud and crass dwarf! I think Yimt is my favorite character, but then again, that would be like picking a favorite out of a line-up of your favorites, if you catch my drift? The plot isn't exactly revolutionary. I will admit it is the standard Fantasy genre storyline, BUT what Evans does with it is what makes it so unique and entertaining.

I think that this book would satisfy even the most hard-core fantasy fans! There are so many stories mingled into this little book that it would satisfy almost ANYONE! Romance, action, fantasy, and humor (usually from the mouth of Yimt.) I was pleased at how well they all fit together. There was nothing forced about it! The story flows and at times becomes very emotional and intense. The budding romance between Konowa and Visyna is sweet and tension packed, all at the same time. A little bit of love never hurt a story, and this one was made very much better for it! The romance aspect rounded out Konowa's character and made him more than just a sullen warrior.

Sometimes a book, especially in this genre, is bogged down with too many details and it kills the fun of reading the story. Chris Evans shows he is a master at keeping the details balanced and keeping the action flowing all at once! The Light of Burning Shadows never had a dull moment! The action was intense and the story even more so. This is one that every self proclaimed Fantasy fan should have in their library! 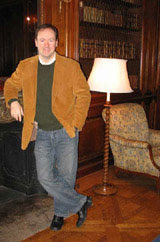 CHRIS EVANS was born in Canada and now lives in New York City. As a military historian he has conducted battlefield tours of Europe and was the historical consultant on a television documentary on the First World War. He’s earned degrees in English, Political Science, and a Masters in History. Chris is also an editor of history and current affairs/conflicts books including the highly successful Stackpole Military History Series.


This review is part of a blog tour for THE LIGHT OF BURNING SHADOWS.