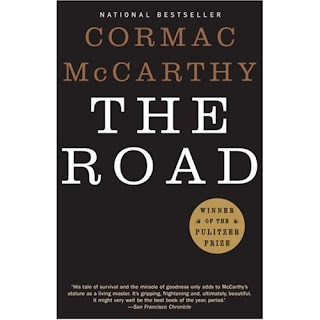 I just found out that one of the best, most depressing (but wonderful) books ever written is about to have a movie! The Road by Cormac McCarthy finally be released!!! It was supposed to be released last year but it got pushed back..*booo*

Here is the story:

Dimension Films and 2929 Productions have finally announced that they will be releasing John Hillcoat’s adaptation of the Cormac McCarthy novel The Road, on October 16th 2009.
The film was originally set to debut during the 2008 Oscar season, but was supposedly pulled due to visual effects issues. Many speculated that the Weinsteins were starting to doubt the dark film’s award potential. Many had expected the film to be dumped in the first quarter dumping ground, but an October release shows that the studio still has some confidence in potential award consideration.

Academy Award nominee Viggo Mortensen, Academy Award winners Robert Duvall and Charlize Theron, Guy Pearce and 12-year-old Kodi Smit McPhee star in the the story of a man (Mortensen) and his young son (Smit-McPhee) traveling through a desperate, post-apocalyptic world. The flap jacket on the book describes the setting as “burned America”.