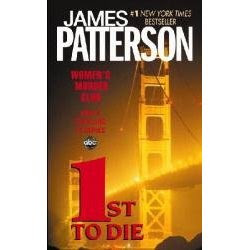 Taken from Amazon.com
Editorial Reviews
Amazon.com Review
The Women's Murder Club pits four San Francisco women professionals against a serial killer who's stalking and murdering newlyweds in bestselling author James Patterson's newest thriller. Lindsay Boxer is a homicide inspector who's just gotten some very bad news. She deals with it by immersing herself in her newest case and soliciting the personal as well as professional support of her closest friend, who happens to be the city's medical examiner. The two women, along with an ambitious and sympathetic reporter and an assistant DA, form an unlikely alliance, pooling their information and bypassing the chain of command in an engaging, suspenseful story whose gruesome setup is vintage Patterson. "What is the worst thing anyone has ever done?" the killer muses to himself early in the narrative. "Am I capable of doing it? Do I have what it takes?" Answering his own question, he embarks on a murderous spree that takes him from the bridal suite in a Nob Hill hotel to a honeymoon destination in the Napa Valley and thence to a wedding reception at the Rock and Roll Hall of Fame and Museum in Cleveland, Ohio. Dispatching his victims on the happiest day of their lives, he purposefully leaves enough clues for his distaff trackers to discover his identity and put him behind bars. But just when the women think they've got the case all wrapped up, the killer turns the tables on them in a bloody denouement that even the most discerning reader won't see coming. Patterson, author of the popular Alex Cross mysteries, promises future adventures for the Women's Murder Club, which may give him an opportunity to develop his heroines' characters more completely and win new fans among those who prefer their detectives in high heels and lipstick. --Jane Adams --This text refers to the Hardcover edition.

From Library Journal
Fans of Patterson (Along Came a Spider) will not be disappointed with his latest effort. A killer is murdering recently married couples, and police detective Lindsay is stumped. Off duty, she forms a murder club comprising three of her friends: an assistant district attorney, a newspaper reporter, and a coroner. The four women use everything at their disposal to figure out who the killer is before he can strike again. Their lead suspect is a world-famous writer whose plots resemble the murders. Deploying Patterson's usual short chapters, the book is exciting to the last page. One hopes that it is the first installment in what deserves to be a new series; Patterson should give Alex Cross a rest and concentrate on these four women instead. 1st to Die will air as a miniseries on NBC in May, so expect demand. For all public libraries.
- Jeff Ayers, Seattle P.L.
Copyright 2001 Reed Business Information, Inc. --This text refers to the Hardcover edition

Okay so I'm not usually drawn to this genre. I admit I'm more of a Fantasy/Horror/Generic Fiction type of gal but after checking out a game based on the book I was intrigued. I picked my copy up from paperbackswap.com so I figured if it wasn't all that great I wasn't really out of anything.

First thing I noticed when I started were the short VERY short chapters. Some of the chapters are only about a page long (does that even really count as a chapter?) I'm probably very strange but that sort of annoys me. I think its kind of a pompous way of padding the book down..calling it a chapter when a page break or a new paragraph might suffice (hope that makes sense?)

The second thing that came to mind, after I got over the chapter thing. This book is very good! I at this time (11:00 am) am only a little under the halfway mark and cannot put this down. Well obviously I put the book down to type this out. I'm pleased so far. The characters are (so far) realistic, no one does inexplicable things, and the plot is moving along very smoothly.

Okay to continue my review of this book...after the initial "Woo I'm reading a thriller!" wore off I really started to pay close attention to the details. Patterson isn't a horrible writer. To me he seems to know how to write a decent female character, which is more than I can say for some male writers. They interacted just about the same way my friends and I hang out. That was a plus mark in my book.

Now on to the meat of the book. The plot. It seems to run so very smoothly from the start but then snags near the ending. The ending? I won't give any sort of spoiler but let's just say that I had already figured it out so the "twist" wasn't all that twisty for me. Don't get me wrong I was pleased at this choice. The novel was decent and I did enjoy stretching out past my usual comfort zone with this one! Will I re-read it? No..probably not. I'm going to post it on my paperbackswap.com account in just a few moments. Would I suggest it to my friends? It all depends on whether they like this genre or not. What is my rating? I'd give this one a 3.5/5 stars simply for the awkward twist near the end.

Thanks for reading my review!