The Kingmaker, Kingbreaker Series (Books 1 and 2) by Karen Miller 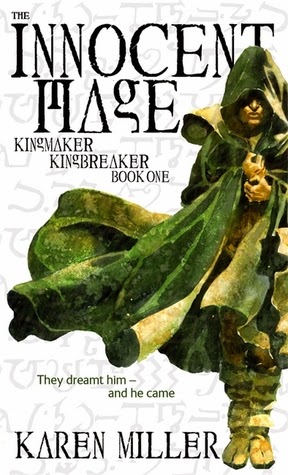 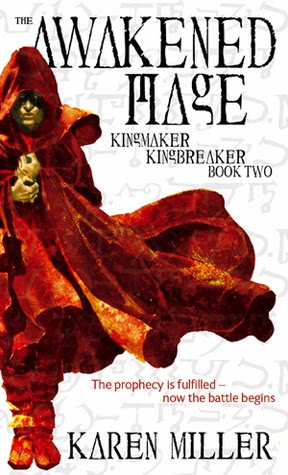 Today I'm bringing you my thoughts on this series by Karen Miller!


I LOVED these books! They weren't perfect, but the characters were simply amazing! I loved slipping into this world and hope to be able to read more of Karen Miller's work!
Book 1:
Enter the kingdom of Lur, where to use magic unlawfully means death. The Doranen have ruled Lur with magic since arriving as refugees centuries ago. Theirs was a desperate flight to escape the wrath of a powerful mage who started a bitter war in their homeland. To keep Lur safe, the native Olken inhabitants agreed to abandon their own magic. Magic is now forbidden them, and any who break this law are executed.

Asher left his coastal village to make his fortune. Employed in the royal stables, he soon finds himself befriended by Prince Gar and given more money and power than he'd ever dreamed possible. But the Olken have a secret; a prophecy. The Innocent Mage will save Lur from destruction and members of The Circle have dedicated themselves to preserving Olken magic until this day arrives. Unbeknownst to Asher, he has been watched closely. As the Final Days approach, his life takes a new and unexpected turn ...

Since this is the first book, expect some set up. There is a lot to be explained about the Kingdom of Lur and it's surroundings. I am really glad that Karen Miller set it up to avoid the dreaded info dump that I hate so very much!

Asher is a super refreshing main character. He's not out looking to be a hero, but he doesn't avoid it when it pops into his life. He's not educated, but he's not dumb either. He's brutally honest, and that is what Prince Gar needs. Someone who isn't afraid to call him on his shiznit, which btw Asher does quite often and it is glorious!

Now this book sets up the two main "races" of people in this world. The Doranen, which are all noble and magic having, and the Olken. The Olken are a hardy race that live without magic. They are basically second class citizens. The Doranen, always hold the power while the Olken are seemingly okay with that.

Now I will say that the plot (Man has a destiny to save his people but he's not aware of it, etc) isn't what makes this book stand out in my opinion. It's the characters and how amazingly well written they are. Asher is a fun character. Gar is interesting, being the only royal Doranen born without Magic. His story is pretty intense too.

The first installment moves along rather swiftly. I definitely suggest picking up the second book as well, since the first one does end on a cliffhanger.


Now onto the second book:

Blurb for Book 2
Asher has come a long way for a fisherman's son. Together with his friend Prince Gar, he has defended their kingdom against its bitterest enemy, but at great cost. Now the evil mage Morg is preparing for his most deadly assault. Desperate, trapped in a broken body, Morg has little time and fewer scruples.

Oh book 2! You ripped my heart to pieces oh so many times! So many times I was like..OMG Karen Miller can you please put my emotions back down and give me a fluffy bunny or a rainbow..SOMETHING to make this all better?!

Needless to say, this book brought the feels pretty hard.

Asher is fully entrenched in things that can get him killed. He's put everything on the line for Gar. He's broken the rules and he is soooo vulnerable. I literally held my breath a few times during this one.

His one bright spot in all this mess is Dathne. She loves him, but is using him to further The Circle's goals. I won't spoil things. I hate spoilers, but even his bright spots have dark spots!

This book moves a lot faster than the first book. It kind of has to, because a LOT of things happen. So many plot twists and turnabouts and well good stuff that made me want more.

I have to say that things are not pleasant near the end. If you cry easy, keep the tissues nearby. I had a few water droplets myself.

In conclusion, I loved this series. It wasn't perfect, but it was just what I needed. I loved Asher and Gar and their friendship. I loved most of the side characters and hated the bad guys. Some characters surprised me and some made me rage. The writing was great and the character/world building was tight. I will read more of Karen Miller's books. There's no doubt about that!
at December 09, 2014