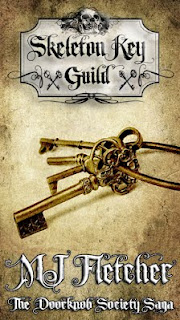 Synopsis:
BOOK #5 in the Doorknob Society Saga
Her parents dead, her sister missing, and those she loves branded traitors to the Old Kind... Chloe Masters is on the run.
To fulfill a parent’s dying wish she will do anything to save the sister she has never met. Can she learn the secrets of the Artifacts before it’s too late? Surrounded by her friends; Slade, Edgar, Jess, Val and the man she loves James Nightshade, Chloe has never had so much to live for... but will her enemies let her?

Author Bio
MJ Fletcher is the creator of the comic book series Adam Zero: The Last Man of Earth published by Ronin Studios. He's also been published in Hope: The Hero Initiative and Digital Webbing Presents. The Doorknob Society series is his fist book series and he's thrilled about it. He lives near the beach with his wife, daughter, dog, and a crotchety cat.