Bringing in the Thieves by Lora Lee (Giveaway) 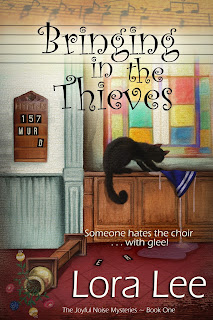 Bringing in the Thieves
by Lora Lee


Frankie Lou's back and Poppy's madder than a wet hen.
Create a church choir filled with teenage misfits?
Over Poppy's dead body.

Minister's daughter Frankie Lou McMasters has come back to Ruby Springs, Texas with her daughter, Betsy, eleven years after running off to marry the town bad boy. Her mild notoriety as a bad girl is prime gossip for her childhood enemy, Poppy Fremont, now choir director of Faith Community Church--where Frankie Lou's daddy, now retired to Florida, was the preacher.

When Frankie Lou comes to the deacons with a request to add a youth choir of at-risk teens she's been coaching, Poppy throws a fit. A few hours later, Frankie Lou finds her dead in the baptistery pool. And Poppy's not playing possum.

Frankie Lou sets out to clear her name as the main suspect, and tries to locate the real killer. Could he be sexy Joe Camps, the father of one of her teen singers? In the meantime, her momma shows up from Florida to take charge of Frankie Lou's life. Bless her heart.

Lora Lee also writes as Loralee Lillibridge. Learn more about her contemporary romances and keep in tune with the Joyful Noise at lora-lee.com

Bringing in the Thieves - Excerpt

I knew the minute I read the church bulletin that I was fixin’ to be Southern-fried and plated-up in front of God, the Faith Community Church deacons, and eventually the entire community of Ruby Springs, Texas, sure as my name’s Frankie Lou Birmingham McMasters.
My well-meaning landlady, Nettie Bloom, had decided to announce my proposed church project without asking me if I wanted her to. I had just scheduled a meeting with the deacons about it, not given them any details about the idea. I hadn’t spoken it aloud to anyone but Miss Nettie. But now there it was in print, along with Miss Nettie’s usual assortment of misplaced phrases and Mrs. Malaprop word choices. Miss Nettie had been editing the church’s newsletter, News From The Pews, for a good many years, but I’d noticed her memory getting a little tangled lately.
NEWS FROM THE PEWS
FAITH COMMUNITY CHURCH
100 Blessings St.
Ruby Springs, Texas

As we wait for the selection of a full-time pastor, we wel­come back interim minister, Reverend Matthew Whitlaw to the pulpit next Sunday at Faith Community. His morning ser­mon will be "Jesus Walks on Water” followed by "Searching for Jesus” in the evening.
For those of you who have children and don’t know it, we have a nursery downstairs.
Members of the Weight Watchers group will meet Monday at 5:30 P.M. for weekly weigh-in. Please use large double door at the side entrance to the annex. The Low Self-Esteem Support Group will be using the back door.
Prior to prayer meeting Wednesday evening, a bean supper will be held in the church hall. Special music will follow.
Until further notice, please give massages to the church secre­tary, Lovey Muchmore. She will then give massages to the newsletter editor who will share the details in our newslet­ter.
SPECIAL ANNOUNCEMENT: A NEW CHOIR FOR TEEN SINNERS IS BEING FORMED AND WILL COM­PETE IN THE SLUMBER FUN AT THE CITY PARK NEXT MONTH. For more information on sinning contact Frankie Lou McMasters at Doc Adderly’s Animal Clinic.
Prayerfully submitted,
N. Bloom, Newsletter Editor

Truth be known, there were certain people who weren’t exactly thrilled by my return to the town where my daddy, Reverend Frank Birmingham, occupied the pulpit at Faith Community before his recent retirement to Florida. I’d been gone from Ruby Springs eleven years, but it seems those certain people have the combined memory of a herd of elephants. One in particular: Poppy Rose deHaven Fremont, Faith Com­munity’s choir director.
I grabbed my tote, made a quick call next door to Miss Nettie’s house, where my eleven-year-old, Betsy, was staying for dinner, then headed for the church. It was a hot spring night and bound to get hotter.
Help me, Lord, Miss Nettie and that newsletter are gonna get me killed one way or another.
THE UNEXPECTED appearance of Poppy Rose deHaven Fremont in the church’s conference room confirmed what I’d feared all along. My notoriety as the shamefully irreverent preacher’s daughter hadn’t been forgotten, even after an absence of more than a decade. Any hope of getting the deacons to approve my request had just been deep-sixed. Well, horse pucky!
There she was, the undisputed Queen of Mean, flapping her colla­gen-plumped lips faster than a whippoorwill’s tail in a windstorm while seven deacons stared in wide-eyed amazement.
I shook my head in disbelief. What in the heck had she done to her­self? Those puffy lips weren’t the only recently enhanced body parts, either. Poppy Rose was a walking, talking endorsement for the modern wonders of plastic surgery and extreme weight loss. My monthly house rent couldn’t begin to touch the high-dollar cost of that hot pink linen skirt and knit top clinging to her man-made curves closer than a coat of paint from Howard’s Hardware. Talk about extreme makeover, her body had been nipped and tucked in places I didn’t even want to think about. Yikes! 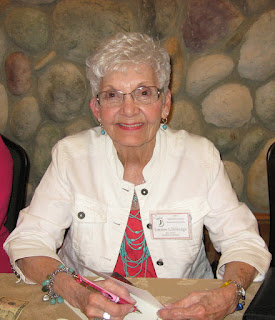 You can’t be a preacher’s kid and raise a little hob without some serious repercussions. Yes, ma’am, that’s the gospel truth. Lora Lee’s JOYFUL NOISE mystery series for Bell Bridge Books, sheds a little light on just how serious those consequences can be when Frankie Lou Birmingham McMasters returns to her hometown of Ruby Springs, Texas after ten years in hopes of putting some shine on her tarnished reputation, but finds herself in the middle of murder and mayhem instead.
Though author Lora Lee insists the series isn’t about her in any way, shape or form, she does admit to being a real-life P.K. (that’s preacher’s kid, in case you didn’t know.) She was born in Texas and her Southern blood runs deep. Her daddy told her any place below the Mason-Dixon line was part of the South, including the Lone Star State.
Since living in West Michigan most of her married life, she’s lost some of her Texas twang, but once in awhile, a might could and a y’all or two slips into her conversation with her critique partners. They love her, anyway. So does her husband of fifty-plus years and their children. With a current family count of twenty-three, get-togethers often resemble an old time revival when they all gather for fun and food.
Lora Lee is a member of Romance Writer’s of America, Mid-Michigan RWA, Sisters-in-Crime, RWA’s specialty chapter Kiss of Death and is currently published in contemporary romance. She is also a proud graduate of the Grand Rapids Citizens Police Academy.
When not writing or trying to keep up with her ever-growing family, she enjoys reading, music and travel. Come back and visit for more on the upcoming release of BRINGING IN THE THIEVES, the first book in the JOYFUL NOISE series, and other upcoming news.