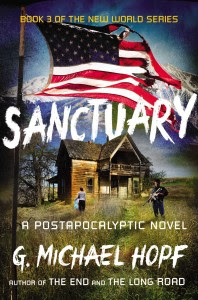 Series: The New World Series
Paperback: 368 pages
Publisher: Plume (May 27, 2014)
Months after a super-EMP attack devastates America, the country is now unrecognizable. Major cities are run by gangs, survivors are dying of starvation and the government is losing control. Those who were prepared for the end find that they weren’t really prepared at all.  While some seek vengeance for their losses, others are determined to restore the nation. In SANCTUARY Gordon Van Zandt and his family are all on different paths, but they are all in search of a home away from chaos.
From the author of post-apocalyptic thrillers The End and The Long Road, this third book in the “New World” series explores what happens when boundaries are stretched beyond imagination, and resourcefulness is the only thing that will keep you among the living.
.


My Review will be near the bottom of this post!

G. Michael Hopf is a former U.S. Marine and bodyguard. For years he has studied and researched the effects of an EMP (Electromagnetic Pulse) attack on the United States. From his research he was shocked by the level of devastation that would befall the country. He wanted to bring awareness to this real threat by creating the world of Gordon Van Zandt in “The End” where this type of weapon is unleashed and a fight for survival ensues. He lives with his family in San Diego, CA.

This book was pretty interesting. It is a first book in a series, so there's some info dump. I realized that this was his first book, so I let that slide. I really enjoyed "meeting" Gordon and wanted to learn more about him. The story was set up nicely and I felt that for a first book, this was a great start!

This second book really worked out better for me. Hopf seems to have smoothed out his writing a lot and made his characters a LOT more vivid. The Long Road is packed full of new dangers and old threats. Gordon definitely came across as more of a "real" person in this one, making me feel the same sense of  dread and panic that I thought he must be feeling (even if he keeps it inside.) The plot had me gripping my book tightly and held my attention til the end! Great second installment! 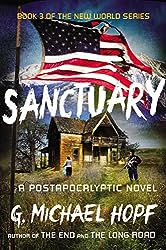 This book wrapped up the series (maybe..will there be another one?) nicely enough for me to feel that it was a satisfying conclusion. I think that as the books progressed the writing got much much better and more fluid! I enjoyed the character development and plot progression VERY much. Most books in this genre go more for the "bang shoot em up pow pow GUNS YEAH macho grrrr" factor and forget to develop the characters. Yes there was the requisite fire power, guys with guns, and such; but as the books progressed I learned more than I expected about the characters and what might sorta happen in the event of a situation like this. The series was thought provoking and fun. A great read all around!