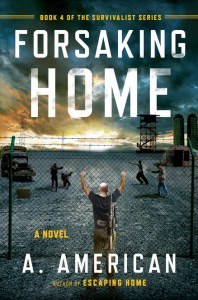 Morgan Carter has weathered the weeks after the collapse of the nation’s power grid, reuniting with his family and ensuring their safety, but his struggle isn’t over yet. Carter must focus on survival in an increasingly unstable society—but the challenges he faces are beyond his wildest imagination.  Meanwhile, the enclosed quarters of the nearby government-run refugee camp make for an environment where injury, assault and murder are the norm. As Jess creates trouble within the camp, Sarge and his crew plot to take down the entire establishment.

From the author of the hit Survivalist Series books, FORSAKING HOME is an action-packed adventure that depicts the harrowing possibilities of a world gone awry, and the courage it takes to protect what matters most.

A. American has been involved in prepping and survival communities since the early 1990’s. An avid outdoorsman, he has a spent considerable time learning edible and medicinal plants and their uses as well as primitive survival skills. He currently resides in North Carolina on the edge of the Pisgah National Forest with his wife of more than twenty years and his three daughters.
Check out A. American’s website for more information.

This book has some issues, but was an interesting story. Definitely aimed at people with prepper interests. Lots of brand name dropping (water bottles, jackets, bags, etc) and at times dry explanations of what is going on. There were a few editing errors that kind of irked me, but all in all it was a great start to a series. Kept me reading and wanting to know what happened next.

Things are getting ssuper tough for Morgan and his family. I really am glad that the first book didn't turn me off to reading more, because it seems like the writer is getting his footing. The story is flowing better, and the writing is much more tighter. There's still the aggravating name dropping, but it's getting a lot less frequent. (Yay!) The action is building and I can say it's a LOT easier to slip into this book and get lost in a crumbling work than the first one.

This book was a bit flat for me. I know it's shorter, so that might be it. Plus the ending was rather abrupt. I did like the added information, but something felt "off." I'm not saying it was horrible, but I am saying that I got to the end was a bit confused by how it just ...stopped. I'm really glad that I was provided with the whole series, because I would be quite miffed if I had had to wait for the next one!

My Review for Forsaking Home: